The Bold and the Beautiful Spoilers: Week of August 26 Preview – Thomas Might Be Dead Because of Brooke – Sanchez Asks If Murder

BY Heather Hughes on August 23, 2019 | Comments: one comment
Related : Soap Opera, Spoiler, Television, The Bold and the Beautiful 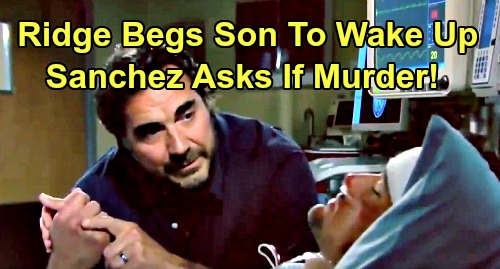 The Bold and the Beautiful (B&B) spoilers preview for the week of August 26-30 tease that some tense episodes are on the way. A chaotic scene just went down outside the cliff house. Brooke Forrester (Katherine Kelly Lang) managed to keep Hope Logan (Annika Noelle) safe, but that push she gave Thomas Forrester (Matthew Atkinson) sent him tumbling off the cliff in dramatic fashion!

A frantic Ridge will race down to Thomas’ unconscious body and shout his name repeatedly. Brooke and Hope will rush down as well as they realize just how bad this is. Thomas will be in a desperate fight for his life, so everyone will be in panic mode. After Hope calls for paramedics, they’ll head right over and get Thomas to the hospital as fast as they can.

The Bold and the Beautiful spoilers say Thomas will be wheeled in and examined by Dr. Jordan Armstrong (Vincent Irizarry). The doc and his medical team will work hard to keep Thomas alive, but it won’t be an easy task. That was an epic fall, so Thomas is lucky he wasn’t killed on impact. Ridge will be terrified as he faces the possibility of losing Thomas, and that fear will bring intense anger.

Brooke will feel awful about inadvertently hurting Thomas, but Ridge won’t believe her side of the story. B&B’s weekly promo shows an emotional argument between this husband and wife. Brooke will promise this was a terrible accident, but Ridge will fire back that she shoved Thomas off a cliff. When Brooke counters that Thomas was out of control, Ridge will insist his son might be dead because of her.

Later, Brooke will pay comatose Thomas a visit. His head will be bandaged as Brooke suggests his father may never be able to forgive her. Brooke will likely tell Thomas she never meant for this to happen and urge him to awaken. There are people who love Thomas and truly want him to get the help he needs.

Detective Alex Sanchez (Jeremy Ray Valdez) will also be on hand with tough questions. He’ll wonder if someone was angry enough with Thomas to help him off a cliff – was Thomas’s fall attempted murder? The detective may get updates on Brooke’s role in all this, so the ordeal will remain a mess for the Forresters and Logans.

Liam Spencer (Scott Clifton) will support Hope as she frets over the situation. He won’t want Hope to blame herself, but that’s exactly what she’ll do. Back with Ridge, he’ll sit by Thomas’ bedside and take his hand. Ridge will beg his son to wake up, so B&B fans will get some gripping scenes this week.