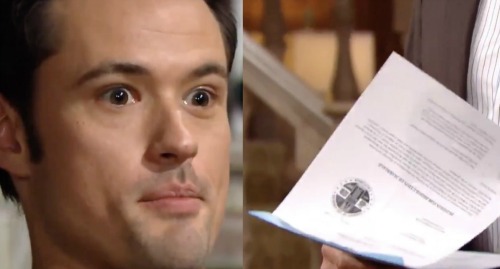 The Bold and the Beautiful (B&B) spoilers for the week of December 2-6 tease that Thomas Forrester (Matthew Atkinson) will once again be at the center of “Bridge’s” battle. B&B fans know Ridge Forrester (Thorsten Kaye) was appalled after he learned about Thomas’ presumed death and the cover-up. Brooke and Ridge haven’t been on the same page about Thomas for a while now, so this was just the final blow.

Ridge insisted it was over and told Brooke goodbye, but he’ll offer a chance to make amends this week. Of course, it’ll really be more of an ultimatum. Ridge will bring divorce papers with him this time, so that’ll let Brooke know he means business. He’ll reveal that they still have a shot at reconciliation – on one condition. Ridge will need to see a major attitude adjustment when it comes to Thomas.

Despite Thomas’ mistakes, Ridge isn’t willing to give up on him. Not now, not ever! Brooke is just as loyal to Hope Logan (Annika Noelle), so Ridge will think she needs to be reasonable. He’ll feel like a house where his son isn’t welcome isn’t a home. The Bold and the Beautiful spoilers say Ridge will want Brooke to make an effort here. He’ll think they can all get along if they put some work into it.

However, Brooke will stand her ground and insist she can’t change how she feels about Thomas. B&B’s weekly preview video shows another emotional “Bridge” confrontation. They’ll go back and forth as usual, but it’ll all come down to one thing: Ridge will want Brooke to forgive and accept Thomas. Brooke will balk at the idea and make demands of her own, but they just won’t be able to resolve anything.

Ridge will talk to Shauna Fulton (Denise Richards) about the divorce papers at some point this week. It looks like that conversation may play out before the next “Bridge” blowup. Ridge won’t be sure he can sign those papers and end his marriage. It’ll be tough to walk away from his Logan, but Brooke may give him no choice.

The Bold and the Beautiful’s weekly promo shows Brooke saying, “I can’t believe this is what you want.” Ridge looks at the divorce paper bundle and says, “If we sign this, it’s over.” Meanwhile, Steffy Forrester (Jacqueline MacInnes Wood) will discuss Ridge and Brooke’s split with Thomas. She’ll be irritated when she realizes Thomas is happy they broke up.

Thomas will insist he won’t apologize for celebrating the end of “Bridge’s” marriage. He may remind Steffy that Brooke nearly killed him by sending him cartwheeling off a cliff. Then, Brooke encouraged Hope Logan (Annika Noelle) to hide his “death” in the vat of doom. Thomas hates Brooke’s guts and won’t be sorry she’s out of Ridge’s life.

As for whether or not those divorce papers will actually be signed, it certainly seems like they will. During the week of December 9-13, Thomas will secretly gloat about Ridge’s decision. It sounds like Ridge may officially be single for Shauna soon!