BY Heather Hughes on November 8, 2019 | Comments: one comment
Related : Soap Opera, Spoiler, Television, The Bold and the Beautiful 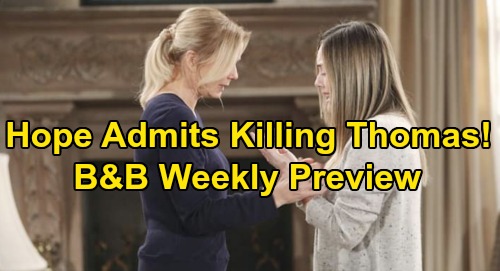 The Bold and the Beautiful (B&B) spoilers for the week of November 11-15 tease that Hope Logan (Annika Noelle) will worry about the outcome of her latest faceoff. She gave Thomas Forrester (Matthew Atkinson) a hard shove to get him away from her, but that decision ended in disaster. Thomas fell over the railing and into the colossal vat below, so B&B fans got quite a Friday cliffhanger.

A desperate search for Thomas will soon get underway – and Hope will get more frantic by the second. She’ll use her phone to light up the dark area and call out Thomas’ name, but she won’t hear a peep other than the sloshing liquid nearby. Hope won’t see Thomas anywhere either, so she’ll begin to fear Douglas Forrester (Henry Joseph Samiri) has lost another parent.

Fans are supposed to think that vat was filled with deadly acid, but there’s a good chance it was replaced by water instead. It’s tough to believe Hope will get rid of Thomas that easily! He already survived that cliff fall, so the guy’s probably got nine lives. Thomas may have slipped out undetected by the time Hope looks down there. He could easily make a quick escape and plot vengeance from afar.

There’s no confirmation on that just yet, but it’s reasonable considering how this played out and what we know about Thomas’ character. However, Hope will be convinced Thomas is dead for now. She won’t know what to do, so she’ll ultimately run to Brooke Forrester (Katherine Kelly Lang) and spill the horrific story. B&B’s weekly preview shows Hope exclaiming, “I killed him! I killed Thomas…”

Brooke will be stunned by Hope’s news, but she won’t blame her for any of it. She’ll contend that Hope was just protecting herself, but Hope will fret over what comes next. She’ll think it’s going to look like she planned this. Brooke’s solution will be to cover for her daughter and make sure Hope doesn’t pay the price for self-defense.

Naturally, viewers are going to have different opinions on Hope’s guilt in the matter, but the point is they’ll keep Thomas’ presumed death under wraps. B&B fans can expect a close call though! The Bold and the Beautiful spoilers say Ridge Forrester (Thorsten Kaye) will approach Hope and insist he knows what she did.

Hope will cry and perhaps nearly confess, but Brooke will swoop in with the save. Ridge will only know about Hope getting Thomas to sign the adoption papers – and even that will leave him furious. Imagine if he knew Hope had killed his son! Brooke will have to keep this massive secret from Ridge, but it’s Hope who’ll feel the guiltiest.