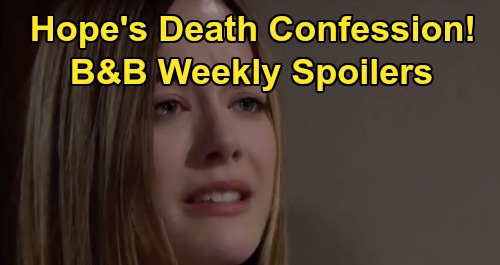 The Bold and the Beautiful (B&B) spoilers for the week of November 18-22 tease that some bombshells are brewing. First, Hope Logan (Annika Noelle) will make a shocking confession to Ridge Forrester (Thorsten Kaye). She’ll crack under the pressure and decide Ridge should know his son is dead! However, it looks like this will be a fantasy or at least a situation where Brooke Forrester (Katherine Kelly Lang) can explain away Hope’s comment. Brooke will definitely step up to cover for Hope somehow.

Ridge will still have plenty to say. He’ll blast Hope for manipulating Thomas Forrester (Matthew Atkinson) into signing the custody papers. Ridge will fly off the handle, which will leave Brooke incredibly upset. She’ll get that Hope’s already emotionally drained and in no shape to listen to this. Brooke will do whatever she can to calm Ridge down and take the pressure off Hope.

Of course, that’ll mean covering up what really happened that night at Forrester Creations. Hope and Brooke will plan to keep the acid vat shocker under wraps. Next, Liam Spencer (Scott Clifton) will strengthen his bond with Steffy Forrester (Jacqueline MacInnes Wood). They’ll promise to spend even more time with Kelly Spencer (Zoe Pennington) and Beth Spencer (River Davidson and Madeline Valdez) as a family unit.

Back with Ridge, he’ll get updates on Thomas’ indecent proposal to Hope. Ridge will bring Steffy in the loop, so they’ll both fret about Thomas’ stability. Steffy and Ridge probably won’t think Hope would lie about Thomas’ quid pro quo, which involved pushing Hope to make love to him. They’ll want to find Thomas and hear his side of the story, but he still won’t be answering his phone or replying to texts.

The Bold and the Beautiful spoilers say Steffy’s mild worries will turn to grave concerns. She’ll realize Thomas is truly MIA and hasn’t been seen in quite some time. Naturally, Ridge won’t feel like he can open up to Brooke about any of this. Part of him may fear Brooke was right all along. At the same time, Ridge just doesn’t view his son as something to be tossed aside and trampled on. He can’t get behind all the Thomas trashing Brooke tends to do.

Furthermore, Ridge will probably think Brooke’s happy that Thomas has disappeared. He’ll be frustrated, but he won’t be alone. Shauna Fulton (Denise Richards) will show Ridge she can be there for him when Brooke fails him. Ridge will fear Thomas is gone for good – at least in some way. He may confide in Shauna about his son’s struggles and determine that Thomas is running from help.

Over with Hope, B&B spoilers say she’ll be fighting a battle of her own: one with her own conscience. Hope will feel horrible about lying to everyone – especially Liam. Guilt will keep consuming Hope, but she’s in for a big surprise when Thomas shows up alive and well. He’ll resurface out of the blue and prove a point to lying Hope.

Thomas will later bring Brooke into this. He’ll do some taunting and suggest Brooke should fill Ridge in on the secret she’s keeping from him. As for Ridge and Brooke’s relationship, it’ll take a crucial turn during the week of November 18-22. Based on all the Shauna hints, it sounds like “Bridge” may be done. Brooke and Ridge may see a way forward after everything that’s gone down. They might decide on divorce due to all the tension they’ll be dealing with.

Back with Hope, she’ll join Thomas in revealing some mom news to Douglas Forrester (Henry Joseph Samiri). Douglas will be thrilled to learn Hope is officially his new mother. Despite Douglas’ joy, it’s clear that Thomas isn’t going to just let Hope off the hook for what happened. He’s got some vengeful moves in store, and Hope may never see them coming.