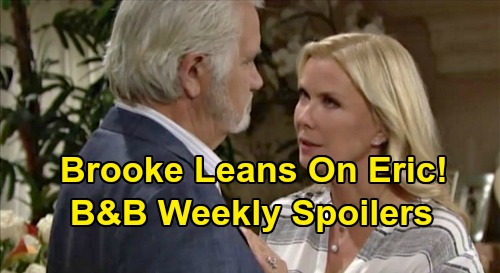 The Bold and the Beautiful (B&B) spoilers for the week of September 16-20 tease that we’ll see some emotional moments and shocking discoveries. First, Brooke Forrester (Katherine Kelly Lang) will need someone to lean on. She’ll realize Ridge Forrester (Thorsten Kaye) didn’t come home after their recent showdown, so she’ll turn to Eric Forrester (John McCook) as a shoulder to cry on.

Meanwhile, Ridge will be dealing with a total nightmare. Thanks to a drunken night at Bikini Bar, Ridge will awaken beside Shauna Fulton (Denise Richards) in bed. B&B spoilers say Ridge will freak, but Shauna will insist they can keep this a secret. She’ll make a pact with Ridge, but her feelings for the handsome Forrester will grow stronger.

When Florence “Flo” Fulton (Katrina Bowden) determines Shauna is smitten, she’ll hit the roof. Flo will make it clear that nothing can happen between Shauna and Ridge, but will Shauna admit it already has? Regardless, Flo will try to nip this in the bud. She’ll think Shauna’s connection with Ridge has disaster written all over it, especially if either one of them ever want to reconnect with the Logan clan.

As for Brooke, she’ll be relieved when he finally comes home and wants to make up. They’ll try to put their fight behind them, but Ridge won’t tell Brooke he’s been in Shauna’s bed! Later, Ridge will make Brooke a significant promise. There’s no word on what that’ll be just yet, but we know it’ll be tough for Ridge to keep.

Perhaps this vow will involve Ridge’s loyalty. Once he opens this cheating door with Shauna, he’s probably destined to walk back through it. Over with Flo, she’ll hold out hope that Wyatt Spencer (Darin Brooks) will forgive her. Flo will take steps to secure another chance with Wyatt, but her mission will prove difficult.

Other Bold and the Beautiful spoilers say Katie Logan (Heather Tom) will fly off the handle. She’ll rip into Flo and remind her she’s no longer part of their family. In fact, Katie will insist Flo has no business being in Los Angeles. She won’t see why Flo’s even sticking around after everything that went down.

Next, Bill will sense that Katie needs him. He’ll pick his love over time at the office, which shows real progress. Bill has been trying to be a true family man for a while now, so it’s nice to see he’s still on the right track. He’ll will show Katie how deep his feelings run, but things will take a scary turn. Tragedy will hit hard, which should set up Katie’s stunning collapse and hospital visit the following week, September 23-27.