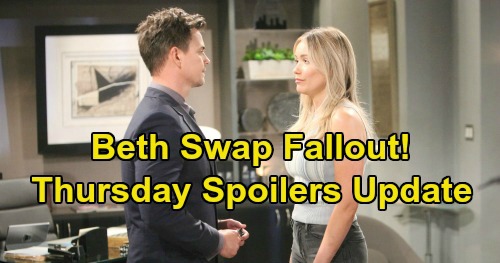 The Bold and the Beautiful (B&B) spoilers update for Thursday, September 12, tease that Ridge Forrester (Thorsten Kaye) and Brooke Forrester’s (Katherine Kelly Lang) conflict will reach a boiling point. Things will get even more heated as they continue to clash over Thomas Forrester (Matthew Atkinson). It’s clear that this battle is going to get truly ugly!

Florence “Flo” Fulton’s (Katrina Bowden) immunity deal sparked Brooke and Ridge’s fierce fight. Brooke feels both Flo and Thomas deserve to pay, but Ridge has made his son the priority. That doesn’t fly for Brooke, who still views Thomas as a threat to Douglas Forrester (Henry Joseph Samiri). She’s banned Thomas from her home and intends to keep Douglas away from Thomas by any means necessary.

The Bold and the Beautiful spoilers say Ridge will fire back in Thursday’s episode. He may bring up that cliff fall again and rant about Brooke’s lack of compassion. Ridge thinks Thomas has paid and will continue to pay as he starts his life over. He’ll feel like Brooke’s being heartless, but she may contend that Thomas is the one who made so many heartless decisions.

Hope Logan (Annika Noelle) was manipulated repeatedly by Thomas, so Brooke can’t just let that go. It won’t take long for Ridge to realize this shouting match is futile. There’s no way they’re going to change each other’s minds, so Ridge will stomp off and try to calm down. Brooke won’t know when Ridge is coming back or if he’s coming back at all. Their marriage will be stuck in terrible turmoil as Ridge storms out.

Afterward, B&B fans can expect a night of drinking for Ridge. He’ll immediately head over to Bikini Bar, where he’ll order up as many rounds as he likes. Ridge will just want to numb the pain of this mess they’re all dealing with. He can’t fix his problems, so he’ll do his best to ignore them with a steady flow of alcohol.

Meanwhile, Shauna Fulton (Denise Richards) will infuriate Brooke with her surprise visit. The Bold and the Beautiful spoilers say Brooke will already be upset over her faceoff with Ridge. That’ll make her emotions even more intense once Shauna arrives. It sounds like Brooke will hold nothing back as she rages over the sorrow Flo and Shauna brought on her family.

Brooke will ultimately kick Shauna out of the house, so Ridge will have someone to keep him company soon enough. Shauna will join Ridge by the end of the week, which will set up some shockers Ridge never could’ve predicted. We’ll give you updates as other B&B news comes in. Stay tuned to the CBS soap and don’t forget to check CDL often for the latest Bold and the Beautiful spoilers, updates and news.