The Bold and the Beautiful Spoilers: Will Hope Get Beth Back While She’s Married to Thomas?

BY Sean O'Brien on May 26, 2019 | Comments: Leave Comments
Related : Soap Opera, Spoiler, Television, The Bold and the Beautiful 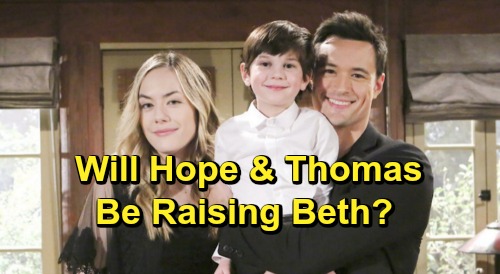 The Bold and the Beautiful spoilers tease that Hope Spencer’s (Annika Noelle) hold of the month’s old girl everyone is calling Phoebe Forrester (Isabella de Armas and Rosalind Aune) telegraphs the future. As soaps go, Noelle’s tortured character will reclaim the girl who is actually Beth Spencer. But changes will come with that incredible outcome as well.

For the moment, Steffy Forrester (Jacqueline MacInnes Wood) is the mother to her own child, Kelly Spencer (Zoe Pennington and Chloe Teperman), who she had with Liam Spencer (Scott Clifton) during one of Steam’s eras. In a plot push, Steffy then happened upon a private adoption opportunity.

Lope entered a fallow period after Beth was believed to have been stillborn. That cowardly lie led to Taylor Hayes (Hunter Tylo) giving the man she viewed with influenced emotions, Reese Buckingham (Wayne Brady), a quarter-million dollars.

Taylor’s payment allowed the doctor who claimed Beth didn’t make it to take two-hundred thousand of those dollars and give them to his bookie, satisfying a degenerate gambling debt. The other fifty K was given to Flo Fulton (Katrina Bowden), who hadn’t yet come into real money as a Logan. Through the transaction Steffy became a mother to the girl she named Phoebe, which honored Taylor’s deceased daughter, who was Steffy’s fraternal twin.

The cacophonous audience response, unheard by any of the involved B&B personas, prevented a right turn back to normalcy. Instead, all have been careening down a slanted arc that will inevitably lead to a ginormous crash.

Yes, Steffy believes that she’s the mother to two girls. But she’s actually the legal mother to one, Kelly.

No, Hope’s personal hell won’t resonate forever. Within coming weeks, depending upon storyline pacing, she’ll learn that her first-born child never died. But by that time the father of her child, Liam, and the woman who’s been caring for her daughter, Steffy, may have revived Steam.

Lope had a dream. Together they would start a family and live a wonderful life.

So, Hope and Liam will eventually realize the dream of raising their daughter. Appearing, at the moment, that they will do so separately, Liam could be a present father to Kelly and the not-there dad to Beth.

The above critiques of Liam’s parental presence is harsh, just as B&B has written it. In this version of fictional reality, Clifton’s character is about to assume full-time hours with his own daughter (Kelly) and the girl (Phoebe) who he currently approaches as a stepdad. Like Steffy, he’s opened his heart to a child not believed to be his own, though Phoebe-Beth is exactly that.

With the anticipated remix, Liam may be with Steffy and Kelly, while Hope is with Beth, Thomas Forrester (Matthew Atkinson), and his son, Douglas Forrester (Henry Joseph Samiri). That would position Hope in the role Steffy now occupies, mothering one child who’s her own and another who’s not her biological offspring.

This presumed world won’t be the one Hope, Liam, or Steffy ever envisioned. But it projects as a possibility on this classic daytime steamer. CDL is a leading source for everything linked to The Bold and the Beautiful. Check back regularly for B&B spoilers and news!