The Bold and the Beautiful Spoilers: Will The Logans Forgive Flo For Baby Switch – Beth Reveal Changes Her Life 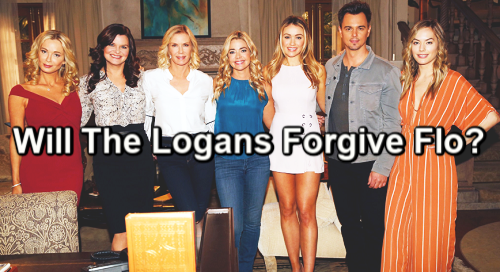 The Bold and the Beautiful spoilers indicate that when the baby switch will finally be over, however it’s the fate of Flo Fulton (Katrina Bowden) that will shock viewers.

Flo has been the main focus of the baby switch saga. She went along with the plan to help her friend Reese Buckingham (Wayne Brady). She had doubts about his plan, but decided to go along with it because thugs were after him. However, Flo’s guilt increased when Flo learned that she was related to the Logan family.

For months, Flo has had to watch her cousin Hope Logan (Annika Noelle) grieve the loss of her daughter. There’s been many times where Flo has wanted to tell the truth, but Zoe Buckingham (Kiara Barnes) made her stay quiet.

The reveal is going to cause a lot of shock-waves within the Forrester, Spencer, and Logan families. But there’s also the question of what’s going to happen to Flo, since she was part of the plan.

Many fans think that this will be the end of Flo. Everyone is going to be mad at her and make sure that she pays for keeping Beth away from Hope. However, knowing the writers of B&B, they’ll have the Logan family find it in their hearts to forgive Flo.

Hope Logan Will Be Furious But May Be Willing To Forgive

At first, Hope’s going to be furious, but then she’ll forgive Flo because she’s family and she believes Flo was an innocent victim.

While Hope may be willing to forgive Flo, others aren’t going to be so quick to forget. Liam Spencer (Scott Clifton) is going to be furious that Flo kept his daughter from him. Plus, Liam’s brother Wyatt Spencer (Darin Brooks) is also going to be angry at his girlfriend’s role in the baby switch. The Bold and the Beautiful spoilers say that Wyatt will dump Flo once her role in the Beth baby swap is revealed.

As for Hope’s mother Brooke Forrester (Katherine Kelly Lang), there’s no telling how she’ll react. A part of her will be upset, but at the same time Flo is her niece and she doesn’t want to cut her out of the family. Flo is the daughter of Brooke’s deceased brother Storm Logan (William deVry), and Brooke feels that if she loses Flo, she’ll lose a piece of Storm.

Do you think the Logans will forgive Flo? Should they? Come back to CDL for all your Bold and the Beautiful spoilers, news and features!

How do you think Wyatt would react to Flo’s secret? #BoldandBeautiful pic.twitter.com/9BNn0Dp8qa