The Bold and the Beautiful Spoilers: Steffy and Hope Fight Over Liam After Beth Reveal – See Who Gets Baby Daddy

BY hellodrdavis on July 19, 2019 | Comments: 2 comments
Related : Soap Opera, Spoiler, Television, The Bold and the Beautiful 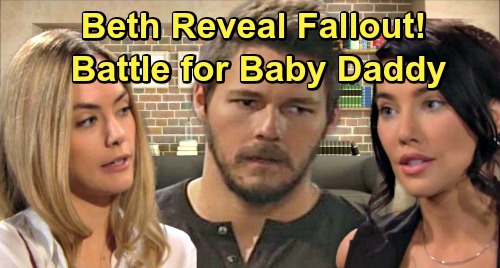 The Bold and the Beautiful spoilers tease that Liam Spencer (Scott Clifton) will soon be on a mission. He’ll overhear a tense argument between Thomas Forrester (Matthew Atkinson) and Florence “Flo” Fulton” (Katrina Bowden) and something about a secret involving Hope Logan (Annika Noelle). That will get his interest piqued and he’ll soon be on the path to discovering the secret about Beth Spencer.

And at some point in the next few weeks, The Bold and the Beautiful spoilers tease Beth’s existence will become known. And when that happens, obviously Hope will want her baby back. That will surely cause some conflict between Hope, Steffy, and Liam.

Of course, for Steffy it will mean giving up her adopted daughter, and that will be tough enough. But once it’s confirmed that Phoebe is indeed Beth, Steffy will really have no choice but to hand the child over to Hope. It will be painful and a difficult transition, but there will be no way to get around it.

But is Steffy going to be as willing to just give up her relationship with Liam as well? Probably not. After all, since Lope split up, Steffy has enjoyed having Liam back home and as a full-time daddy to their daughter Kelly Spencer (Chloe Teperman and Zoe Pennington). She and Liam have been on the path to getting back together, and certainly she’ll want stability for Kelly.

It will be interesting to see what Hope’s expectations are for Liam when she finally gets Beth back. Hope may think that she can reclaim her relationship to Liam. Sure, she’ll be married to Thomas at that point, but surely she’ll see Beth as a game changer. Hope will probably want Liam back and as a full-time daddy to Beth.

And that will put Liam right back at square one…smack dab in the middle of not only two women, but his two daughters as well. And if you thought you saw Liam waffle between Hope and Steffy before two children were part of the picture, just wait until he has to choose between Hope/Beth and Steffy/Kelly. Yikes!

Of course, there will be a lot of details to work out – Thomas and Douglas Forrester (Henry Joseph Samiri) being the biggest details of all. By the time Beth is revealed to be Phoebe, Hope will be busy being a mommy to Douglas. But after all that dust settles, the pressure’s going to be on Liam once again to choose – does he want to be a full-time, live-in daddy to Beth or to Kelly?

One can only imagine the drama viewers will face! What do you think Liam will choose? Stay tuned to the CBS soap and don’t forget to check CDL often for the latest Bold and the Beautiful spoilers, updates, and news.