The Bold and the Beautiful Spoilers: Hope’s Honeymoon Horror – Thomas Wants Bride Pregnant ASAP – Drugs Her To Get His Way

BY hellodrdavis on July 18, 2019 | Comments: 3 comments
Related : Soap Opera, Spoiler, Television, The Bold and the Beautiful 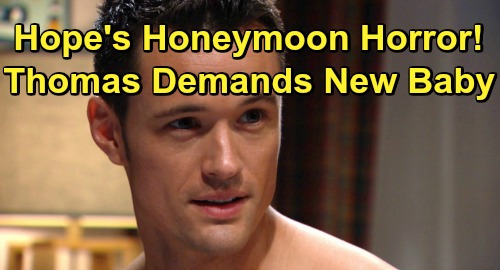 The Bold and the Beautiful spoilers tease that Thomas Forrester (Matthew Atkinson) will further his plans to solidify his relationship with Hope Logan (Annika Noelle). As B&B viewers know, he’s finagled a quick marriage with Hope, and it appears that the wedding is going to happen, and Hope will indeed become Mrs. Thomas Forrester.

Of course, B&B spoilers also say that the wedding will have some big twists and turns along the way. It seems that Hope will be delayed in walking down the aisle, perhaps as she contemplates whether she really wants to go through with the wedding. And Thomas and Liam Spencer (Scott Clifton) will get into it during the delay, which should unsettle everyone in attendance.

Perhaps what will keep Hope delayed from her big walk down the aisle will be thoughts of what the honeymoon will entail. Of course, it doesn’t seem that the couple is planning a destination honeymoon, given how quickly the wedding has come together. But The Bold and the Beautiful spoilers indicate that Thomas will put together a “staycation” honeymoon for himself and his new bride, and that can only mean one thing.

As B&B viewers know, Thomas has pressed Hope already about being intimate with him, but she’s told him on more than one occasion that she’s not ready to make love. Hope could barely stand to make love with Liam after their daughter died, partly out of her grief but also because she was terribly afraid of getting pregnant again. Hope doesn’t want another baby, as she doesn’t feel like she could go through another loss if something were to go wrong again.

Well, Thomas isn’t the most patient man, especially when he really wants something, and it’s clear that he wants Hope very badly. He wants to make Hope his in every conceivable way and ensure that she’s not still pining for Liam. Thomas wants nothing more than for Liam to move on with Steffy Forrester (Jacqueline MacInnes Wood) and for Hope to be a wife to him…in every sense.

So Thomas will put together an intimate staycation honeymoon for himself and his new bride, and that will be something that Hope isn’t too thrilled about. It appears that Hope and Thomas may not even be sharing a bed in the days immediately following the wedding, but when Thomas plans the staycation, he’ll certainly arrange for a single bed for the couple.

And what’s Thomas’ master plan here? Of course, he’ll want to make Hope “his,” but could he also have the intention of getting Hope pregnant? We wouldn’t put it past Thomas at this point, and he’s proven that he’s certainly willing to manipulate situations to get what he wants. After all, he drugged Liam so that he’d sleep with Steffy, so could he be planning to drug Hope, too?

It’s a terrible thought, but this is Thomas that we’re talking about, and he is willing to do just about anything to get his way. The Bold and the Beautiful spoilers tell us that Thomas’ drug peddling pal, Vincent Walker (Joe LoCicero), is returning to B&B for a 5 arc episode soon so drugging Hope is certainly on the cards. Hopefully, Hope is careful in her ongoing dealings with Thomas, because you never know what he might do!

At any rate, B&B spoilers indicate that the whole idea of Thomas’ staycation plan will instil fear in Hope. She’ll be seriously unnerved by the idea of an intimate honeymoon period with her new husband, as she still won’t be ready to sleep with Thomas. Of course, since she doesn’t love Thomas, the thought of being with him will probably make her skin crawl.

We’ll see how Hope negotiates the whole thing. Do you think that Thomas will push to have a baby with Hope? Stay tuned to the CBS soap and don’t forget to check CDL often for the latest Bold and the Beautiful spoilers, updates, and news.