The Bold and the Beautiful Spoilers: Will Thomas and Liam Battle to the Death – Showdown Over Hope Brings Gruesome Outcome?

BY Heather Hughes on July 23, 2019 | Comments: one comment
Related : Soap Opera, Spoiler, Television, The Bold and the Beautiful 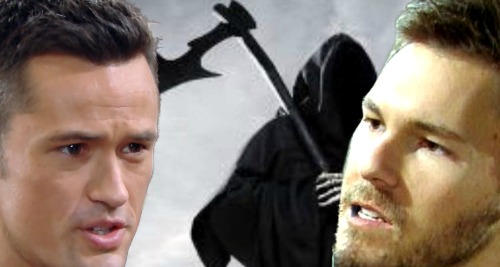 The Bold and the Beautiful (B&B) spoilers tease that Thomas Forrester (Matthew Atkinson) will struggle to contain his anger. His plan to win Hope Forrester (Annika Noelle) has been chugging right along so far. Thomas has hit a few snags, but he’s been able to conquer the obstacles. He naturally assumes that’ll continue to happen, so he’ll grow frustrated when his plot comes to a screeching halt.

It’s one thing for Hope to marry Thomas, but having sex with him is another story. Hope could barely even sleep with Liam Spencer (Scott Clifton) – a man she truly loved – after Beth Spencer’s death. The idea of conceiving another child is terrifying to Hope, who can’t bear to lose a third baby after all the suffering she’s endured.

That idea’s probably pretty terrifying for B&B fans as well! The last thing most viewers want is a “Thope” spawn thrown in the mix. We’ve all had our fill of pregnancies and baby drama for a while. The good news is that The Bold and the Beautiful spoilers say Hope will pump the brakes on hitting the sheets. The bad news is Thomas won’t take it well. He’ll grow increasingly furious when Hope refuses to consummate their marriage.

Thomas will already be in an unhinged state as Liam closes in on the truth. He’ll realize Liam’s putting this puzzle together, so he’ll definitely feel the heat. However, Thomas doesn’t usually let fear overcome him. He’s the kind of guy who adjusts his plan as necessary and uses his rage to fuel his goals.

Once Liam discovers Florence “Flo” Fulton (Katrina Bowden) was never pregnant, he may assume that’s the secret Thomas threatened her with. Liam might believe Thomas wanted it kept quiet for Steffy Forrester’s (Jacqueline MacInnes Wood) sake. The truth is far worse, so that’ll lead to more conflict down the road.

Is B&B building to the ultimate showdown between Liam and Thomas? Will this be a battle to the death? The Bold and the Beautiful has really taken Thomas down a sinister path. He’s not going to be a viable love interest for anyone anytime soon – if ever. This whole arc seems designed to destroy the character and potentially have Thomas face a grim fate.

Could Liam be responsible for that fate? Liam will have a target on his back thanks to his Flo investigation. Thomas may feel like if Liam dies, his problems are over. Hope can finally move on and all the “Phoebe” digging will stop. It’s not that simple, but it might be in Thomas’ mind.

If Thomas tries to kill Hope’s ex, Liam may have to resist with deadly force. How soapy would it be for Hope’s former husband to kill her lying new one in self-defense? The Bold and the Beautiful spoilers say some crazy moments are ahead, so don’t miss all the action.

We’ll give you updates as other B&B details emerge. Stay tuned to the CBS soap and don’t forget to check CDL often for the latest Bold and the Beautiful spoilers, update sand news.