The Bold and the Beautiful Spoilers: Wyatt’s Heartfelt Apology To Sally After Flo’s Deceit – Wally Get Back Together

BY hellodrdavis on August 3, 2019 | Comments: one comment
Related : Soap Opera, Spoiler, Television, The Bold and the Beautiful 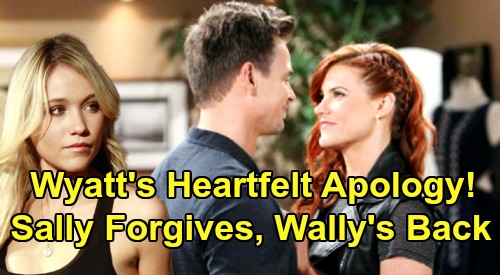 The Bold and the Beautiful spoilers tease that Wyatt Spencer (Darin Brooks) will be feeling heartbroken. As B&B viewers know, he’s just heard a horrible tale of lies and deceit from the supposedly honest and trustworthy Florence “Flo” Fulton (Katrina Bowden). Wyatt stood there in utter shock as he heard Flo recount how she never gave birth to Phoebe Forrester (River Davidson and Madeline Valdez) and how she’s been lying for months.

Of course, Wyatt will quickly realize that this means that Flo has been lying ever since she set foot in Los Angeles, and that she’s been maintaining her lies ever since the two of them got together in the first place. It looks like Wyatt’s shock and disbelief will quickly turn to anger and disillusionment, and he’ll have some choice words for Flo.

We can’t forget that Flo didn’t just simply lie and deceive someone; she perpetrated illegal activities and deliberately kept a baby from its parents…parents who happened to be close to Wyatt. As B&B viewers know, Wyatt is very protective of his brother Liam Spencer (Scott Clifton) and he used to be married to Hope Forrester (Annika Noelle), so Flo’s deception of Liam and Hope is going to run deep for Wyatt.

Well, according to B&B spoilers, Wyatt will predictably dump Flo. He simply won’t be able to continue in a relationship with someone who sought to hurt his brother and Hope, and he’ll quickly rid himself of his first love and high-school sweetheart.

As Wyatt spends some time reflecting back on the past several months, he’ll not only be devastated about Flo’s lies and deception, but he’ll realize that he let someone wonderful and very important to him go in order to further along his relationship with Flo…Sally Spectra (Courtney Hope). Remember that Wyatt had a major reaction when Sally kept a secret from him about Thomas Forrester’s (Matthew Atkinson) plot to break up Hope and Liam.

Wyatt not only railed against Sally, but he began his relationship with Flo before his relationship with Sally had ended. Sure, Sally had behaved inappropriately with Thomas, but Wyatt behaved inappropriately, too. He clearly let Flo into his life when he was still with Sally, and according to B&B spoilers, he’ll start to feel terrible about that.

So Wyatt will swallow his pride and track down Sally. The Bold and the Beautiful spoilers say he’ll let her know exactly what Flo did to the people he loves, and after Sally recovers from her shock over the depths of Flo’s deception, Wyatt will offer her a heartfelt apology. Exactly what happens from here remains to be seen, but it’s most likely that Sally will accept his apology.

After all, Sally and Wyatt truly loved each other, and chances are they still have deep feelings for each other. They may not get back together right away – after all, Wyatt will probably need some time to recover from what he’s just been through with Flo – but chances are, they’ll be able to rebuild from here. Perhaps they’ll start by rebuilding their friendship, since Wyatt could really use a friend right now.

Time will tell whether “Wally” is ever resurrected, but we think the chances are pretty good going forward. If Sally and Wyatt can ultimately agree to put honesty first in their relationship and learn from the past, we could see them back together very soon!

Would you like to see Wyatt and Sally back together, now that Flo has been exposed? Stay tuned to the CBS soap and don’t forget to check CDL often for the latest Bold and the Beautiful spoilers, updates, and news.