BY Heather Hughes on August 3, 2019 | Comments: one comment
Related : Soap Opera, Spoiler, Television, The Bold and the Beautiful 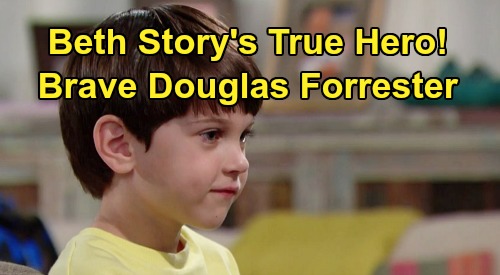 The Bold and the Beautiful (B&B) spoilers reveal that the week of August 5-9 will bring more Beth Spencer revelations. The truth will continue to trickle out thanks to one brave soul and fan favorite. OF course, we’re talking about Douglas Forrester (Henry Joseph Samiri). Liam Spencer (Scott Clifton) told Hope Forrester (Annika Noelle) that Douglas was his “freaking hero” – and many viewers agree!

B&B fans have watched the secret circle grow and grow. We’ve seen adults let a grieving mom suffer and cave into Thomas Forrester’s (Matthew Atkinson) threats. Meanwhile, little Douglas wasn’t afraid to stand up to his dad. Not only did Douglas’ defy Thomas’ terrible orders to stay silent, he called his Pops to gloat about it!

Ordinarily, we wouldn’t condone disrespecting parents, but Thomas doesn’t deserve respect. He’s in the running for worst father of the year after the way he’s manipulated poor Douglas and thrown away Caroline Spencer’s (Linsey Godfrey) memory like trash. This is a boy who was mourning his mommy, but Thomas was more concerned about getting Hope in bed. It’s like he barely cares about Douglas at all.

Douglas indeed stepped up and did what the others wouldn’t. Florence “Flo” Fulton (Katrina Bowden), Shauna Fulton (Denise Richards), Zoe Buckingham (Kiara Barnes), Xander Avant (Adain Bradley) and Thomas all kept Reese’s rotten secret. It took a kid’s natural inclination toward honesty to set this big reveal in motion, and we’re all beyond grateful.

On Twitter, Bold and the Beautiful viewers have been full of praise for Douglas’ actions and Henry Joseph Samiri’s performance. He’s a great child actor and could be a contender for a Daytime Emmy in the younger actor category. Samiri has really done a fantastic job throughout this baby swap storyline.

“That little guy is amazing!! #BoldandBeautiful Douglas you are every fan’s hero who has waited a long long time for the truth to come out,” one fan tweeted. Another viewer exclaimed, “YESSSSS!!!!!! Douglas did in one day that the adults wouldn’t do for months on end. Douglas is our hero!!”

“I so love this brave little fella right now,” one more fan said. “Douglas did what so many grown ups were to scared to do because they all were being too SELFISH to truly care about Hope and Liam or baby Beth. Douglas proved he cares for all 3.”

Douglas came through for B&B watchers in a big way, so let’s appreciate his role in this hot plot! The Bold and the Beautiful spoilers say Douglas will need his family more than ever soon since Thomas is going off the rails. Thomas will convince himself he can win Hope over, so disaster could be brewing.

Are you glad Douglas FINALLY exposed the truth about Beth? We’ll give you updates as other B&B news comes in. Stay tuned to the CBS soap and don’t forget to check CDL often for the latest Bold and the Beautiful spoilers, updates and news.