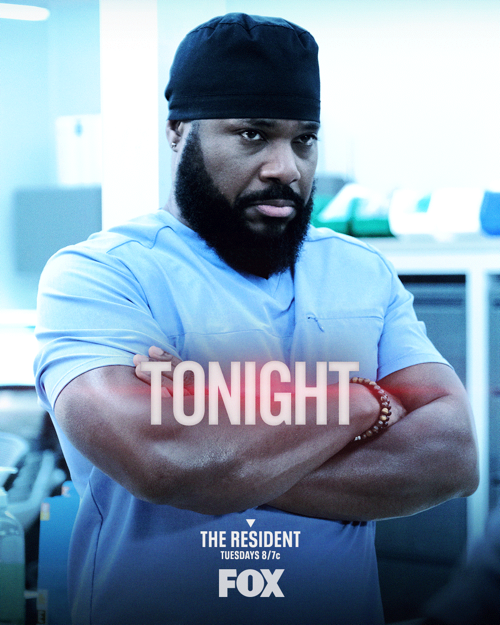 Tonight on FOX their new medical drama The Resident airs with an all-new Tuesday, November 19, 2019, episode and we have your The Resident recap below.  On tonight’s The Resident season 3 episode 7, “Woman Down”  as per the FOX synopsis, “When one of Chastain’s own is brought into the emergency room with life-threatening injuries, the staff rallies around each other to try to save her life, while disagreements over how to best handle her care put Cain at odds with the rest of the doctors.

Bell is met with an unexpected response when he voices concerns regarding the nursing shortage that Nic brought to his attention. Meanwhile, Conrad turns heads when he shares data about Hemopleatin, and Kyle begins volunteering at the hospital.”

The Resident season 3 episode 7 airs at 8 PM – 9 PM ET on FOX. Make sure to bookmark this spot and come back for our The Resident recap! While you wait for the recap make sure to check out all our television recaps, news, spoilers & more!

Conrad walks with Bell telling him about Jessie and how she died from the drug trials that were supposed to help with her anemia. When he doesn’t seem interested, Conrad tries to put a PR spin on it. His beeper goes off. He runs to the ER.

Jessica is brought into the ER after getting into a car accident. She has massive head trauma. Irving is upset. AJ tells him to leave the room. She flatlines. They push him out. They start chest compressions. Irving gets back in. Seconds are intense as they work to get a pulse. They finally do when they see major abdominal bleeding. They rush her into the OR. AJ and Caine fight over what to do to help her.

Nic tracks down Bell to get an update on Jessica. She gets very angry at Bell, explaining that Jessica worked a double and if she didn’t this would not have happened.

Irving tells Devon and Conrad that he is the proxy for Jessica for the time being until her parents arrive. He blames himself for all of this. He didn’t stop her from working doubles and then he let her drive home tired. Devon tells him to focus on what he can do now. Don’t play the blame game.

Before proceeding in the OR, AJ asks anyone too tired to step out for Jessica. They need to give their best. One of the scrub nurses leaves. Caine finds this all pathetic. Mina steps up to be the scrub nurse. Caine scoffs.

Nic has a new nurse by her side. She updates her on all of the happenings. Nic’s dad shows up. He is volunteering. Now Nic has two trailing her.

Jessica is out of surgery. They managed to fix her abdominal bleeding but she still has a lot of intracranial pressure. Nic and Conrad comfort Irving who is by her side.

Bell comes into his office to find a man by the last name of Kim, who tells him he is from Red Rock, Chastain’s more powerful sister hospital. Kim informs him he will be taking over on the day to day of the hospital. Bell tells him about Jessica and how she was overworked. Kim doesn’t want that to get out.

Nic and Conrad sit in a supply close, talking about what happened to Jessica. They both get paged.

Jessica still has increased swelling and with the more time that goes by it becomes more and more dangerous. Caine wants to bring her into surgery well AJ thinks that Conrad should make the call since Irving asked him to. KingOnes Conrad that if Jessica dies it is on him.

AJ pulls Conrad aside and asked him if he thinks he’s making the right decision about putting off surgery. Cain might be right but whenever Conrad decides he is on board.

Mina and Devon try to get Irving to go and eat. It isn’t willing to until Bell asks for some time alone with Jessica.

At lunch, Irving isn’t doing well. Mina is also doing bad when she explodes on the lunch lady in the cafeteria because she does not have a tri-tip sandwich for Irving, it’s his favorite. Mina apologizes but the lunch lady cuts her off and explains that they all heard about Jessica and they understand.

After some labs are run they realize that Jessica is still bleeding somewhere. Irving gets really upset and accuses AJ of missing something in the CT scan. Conrad brings Jessica down to be scanned again when Bell comes in. He tells Conrad that he will get him access to the drug trials and dialysis to help with Jessie’s case. He will do that for Jessica because she was his favorite OR nurse. They stand side-by-side watching her in the scan with tears in their eyes.

Nic has to reassure her new nurse that she will be fine after a patient attacks her. Luckily, Nic’s father stepped in to take a few blows before getting bit.

They finally decide to take Jessica into surgery. Before they go in Caine scolds Conrad for waiting so long. When Caine cuts into Jessica’s school she starts to bleed profusely, she is not clotting. Conrad intervenes. He thinks she needs a special type of therapy called plasmapheresis to help her through surgery. He brings the machine into the OR, Caine begins to yell. Bell steps in and tells Caine to stand down, Conrad can stay in the OR.

Post-surgery, Nick assesses Jessica. It looks like she is beginning to clot. Irving isn’t so sure she will ever be the same. Meanwhile, Bell runs into the VP from Red Rock again who compliments him on making a deal for the drug trials and dialysis but pushes his weight around once again to tell Bell that he is now in control.

Nic and her father finally get a minute to talk. She knows he only came to the hospital to help because he thought she was the nurse who was in an accident. He tells her that she is all he has left.

Nic and Irving sit by Jessica’s bedside. She finally wakes up. Irving comforts her. They all celebrate after. Caine grabs Conrad for a word to tell him he should never question his authority again. Caine visits with Kim after to tell him Conrad is a whistleblower and a threat to the hospital.