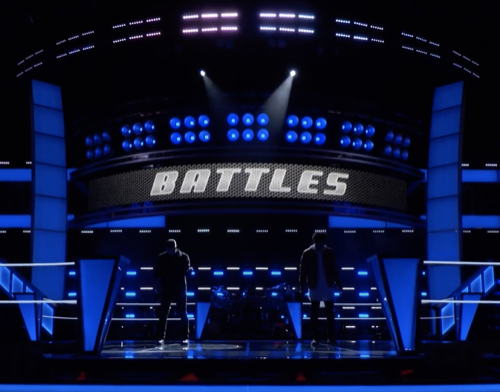 Tonight on NBC’s Emmy Award-winning musical competition The Voice airs with an all-new Tuesday, April 9, 2019, season 16 episode 10 and we have your The Voice recap right below. On tonight’s The Voice season 16 episode 10, called, “The Battles Part 4,” as per the NBC synopsis, “The “battle rounds” continue and the coaches join forces with music industry professionals for guidance. Christina Aguilera teams up with singer/songwriter Sia Furler, Adam Levine with music producer Adam Blackstone, Cee Lo Green with singer Monica, and Blake Shelton with Grammy-winning singer Reba.

In this phase the coaches will pit two of their own team members against each other in a dueling duet. After the vocal face-off, each coach, with the help of their adviser, must choose which of his/her singers are the strongest and four vocalists will advance to the live shows.”

Its the final night of the battles. The first ones to battle tonight are from Team Adam, Patrick McAllon vs. Andrew Jannnakos, the two are mentored by Charlie Puth and are singing, “Free Fallin’,” by Tom Petty.

Judges Comments: Blake: “Patrick I remember you from the Blind Auditions, most because you said no to me on national tv, but I’m a fan. The discovery here is Andrew, my gosh you soared on those courses now.” Kelly: “Andrew, in the Blinds I thought you were good, here I thought you were great. You just showed your range a bit more. It’s funny, my playlist sounds more like what Patrick is, I love your vibe, your tone is really cool. Andrew, you won this one.” John: “It’s interesting because when you guys are harmonizing, I looked at Adam to find out who was singing the high note because I was like kind of jealous.” Adam: “You guys are both amazing and honestly I think that when it comes down to a moment like this.. Patrick you are seasoned, Andrew you really hit those high notes, you both stepped up and impressed me.”

The winner of this battle is Andrew.

Next from Team Blake is Cecily Hennigan and Selkii, the two are being mentored by Brooks and Dunn, and they are singing, “Head Above Water,” by Avril Lavigne.

Judges Comments: Kelly: “I love that song, you both have completely different voices. Selkii you have this kind of rocker vibe, raw and storyteller. Cecily, you are polished and I had no idea you were 16, that is very impressive.” John: “Selkii you have a little more definition about you. Cecily is younger but has this beautiful instrument.” Adam: “Selkii you broke my heart. Cecily sang the crap out of it, I think you both did fantastically.” Blake: “I am torn on this one, both of you surprise me. the caliber of performances makes it difficult for me.”

The winner of this battle is Selkii.

As the night continues, the judges are faced with more tough decisions. Team Blake’s Carter Lloyd Home vs. Lili Joy when they battled and sang “I’ve Got You, Babe,” by Sonny and Cher. Blake chose Carter as the winner of the battle.

Team Kelly’s Alena D’Amico vs. Karen Galera when they battled and sang, “Imagine” by John Lennon. Kelly chose Karen as the winner of the battle.

Time for the final battle of the night. John and Khalid get prepared to mentor Kayslin Victoria vs. Oliv Blu when they battle and sing, “Location,” by Khalid.

Judges Comments: Adam: “That was awesome, I love that song and I loved how you did it. That was close. Oliv you had some jazzy runs, Kayslin you are so good.” Blake: “John has a tough one here, on one hand, Kayslin is 16 and the development that can happen is enticing and we all think you have a kinship musically.” Kelly: “I was hanging on every single syllable that you were doing Oliv and I thought the style was there but Kayslin has a gigantic voice for a little human, I think I could give you any song and you could do it.” John: “I am truly up in the air, Oliv owned every moment but Kayslin is a fantastic singer.”

The winner of this battle is Kayslin.

Blake steals Oliv, he loves her jazzy voice and can’t wait to see where she goes.