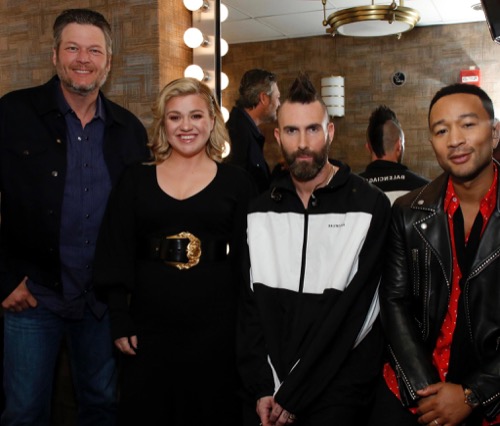 Tonight on NBC’s Emmy Award-winning musical competition The Voice airs with an all-new Tuesday, May 14, 2019, season 16 episode 20 and we have your The Voice recap right below. On tonight’s The Voice season 16 episode 20, called, “Top 8 Semi-Final Results,” as per the NBC synopsis, “Three artists will be revealed as safe by America’s votes. After these finalists are revealed, the bottom two artists will be sent home immediately, while the middle three artists will compete in the Instant Save for the last spot in the finale.”

Blake Shelton opens the show singing, “God’s Country.” The top eight finalists come out on stage. In no particular order, the first contestant moving on is Maelyn Jarmon from Team John. Another artist saved by America’s votes is from Team Blake, Dexter Roberts.

The remaining artists go back on stage, the third artist who is safe from elimination and moving on to the finals is Gyth Rigdon from Team Blake.

That is two artists for Team Blake and one for Team John so far.

Emily Ann Roberts was the young country singer in season 9 from Team Blake, she is back on the Voice stage tonight with her new single, “Someday Dream.”

The five remaining artist return to the stage, three of them will be performing for the very last instant save. The remaining two means they have the lowest votes and will be leaving us tonight.

The first artist performing for a spot in the finale is from Team John, Shawn Sounds; the second artist is from Team Kelly, Rod Stokes; and from Team, Andrew Sevener.

Kelly: “It was so good. Your voice, I have been dying to sing like you my whole life. I am so glad that we got to sing together. It is such a great thing, you have such a classic voice, it just dominates any genre.”

From John, Shawn Sounds singing, “That’s What I Like.”

John: “America you saw what he did tonight. I feel so fortunate to have worked with someone who is so gifted like you. You do it all so beautifully.”

The power is in America’s hands to save one of these three artists.

There remains one spot in the finale. Blake tells Andrew that if he goes home tonight, he is going to hire him to sing in one of his bars.

The fourth finalist is Andrew Sevener.