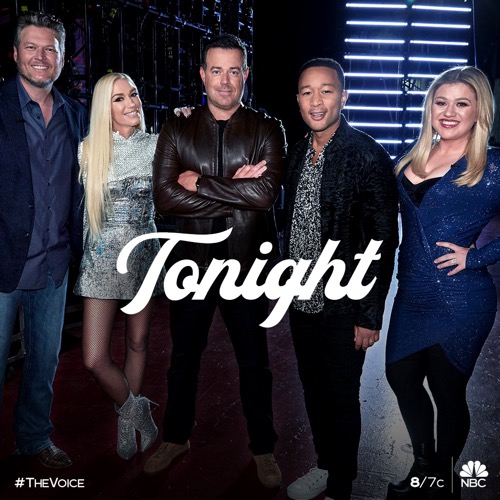 Tonight on NBC’s Emmy Award-winning musical competition The Voice airs with an all-new Monday, October 14, 2019, season 17 episode 7 and we have your The Voice recap right below. On tonight’s The Voice season 17 episode 7, called, “The Blind Auditions, Part 7 – The Battles Premiere,” as per the NBC synopsis, “The blind auditions conclude.

Tonight on The Voice blind audition’s the coaches finalize their teams, the first singer who’s 16, Zoey sings “angel of mine” and she does very well holding every note delivering each note from deep within and very polished delivery and picks John legend as her coach, completing his team.

Next up is Matthew he has a mellow raspy voice and not overpowering or forced, Kelly Clarkson really wants him on her team but he chooses Blake’s team to be on.

Next up is Gracee, she’s a young 16 yr-old country singer, Kelly presses her buzzer immediately followed by Gwen Stefani, she holds her notes very well and is controlled in her breathing, they both want her due to her old country sound and even tho Blakes team is full he tries to persuade Gracee to go with Gwen since they are dating, but in the end she chooses Kelly as her coach, leaving Gwen’s team the last to be needing a singer.

Next up is male singer Ty who’s an EMT who’s true passion is in music he has a very unique old school raspy voice singing Al greens “Let’s stay together “ unfortunately Gwen doesn’t press her buzzer saying she’s being picky and waiting for that magical voice.

Next up is singer Caroline who the judges felt is young while their chairs are turned and cause Gwen to hesitate on pressing her buzzer but she eventually presses it, Carokone tells Gwen she looks up to her and Green Day, Gwen gifts her a sweater to welcome her to her team.

Now all coaches teams are full they move onto the battles where they pick pairs of singers to face off against each other which the judge’s state is very hard to do. Singer Usher is John Legends advisor, Zoe, and Khalea battling to the song “Boy is Mine “ usher advises to Khalea to use some more strength and aggression in her voice and for Zoe to use some sass, Khea is Woodies about the age difference between her and Zoe since she is older than her. Both women head to the stage to perform and battle, both ladies deliver each note and rift so effortlessly.

The judges are very impressed, Gwen states she feels Zoe has won the battle, take sides with Khalea but the final decision is up to John and he states he regrets putting them against each other since he wants both of the women but he sides with the most versatile singer being Khalea.

John uses his save on Zoe regretting putting her up against Khalea, when Kelly and Gwen attempt to steal her, in a surprise turn of events she chooses to stay with her coach John. Up next is Bkakes team singers Josie versus Kat, Blakes musical advisor Darius Rucker.

The men both feel the lady’s body language is saying they are nervous and tells them to be more confident and comfortable performing on stage so that they can connect with the audience.

The women have been given the song “Take me home country road” by John Denver they both sing in the same Melody seemingly singing together instead of at each other which is the opposite of a battle, their voice and style of singing is not much different from one another.

John sides with Josie, Gwen with Kat, Kelly tells the audience that the women’s choice of song and airy style is very difficult to do since it requires using less air to deliver the notes, in the end, Blake chooses Kat.

Next up is Kelly and her singer Shane Q and Melinda singing Sam Smith “Never too good at goodbyes”, her musical advisor is Normani from girl group Fifth Harmony. They tell the singers to get on the same page and tell Melinda to get out her head and use fewer rifts since she’s already a good singer.

Shane was nervous at first due to him being overweight but his voice overpowers his size. Both singers bring their “A” game delivering notes from deep within and melodic rifts with much control and they both were confident on stage, Both Blake and John say they would side with Shane Q, Kelly has the final decision just before she says she wishes she didn’t put them against each other and she chooses to save Shane Q, and just as Melinda is about to give a goodbye speech Kelly presses her button to save her, and John presses his to steal her saying she should upgrade and choose him for a coach, but she decides to stick with her home team and picks Kelly as her coach again.