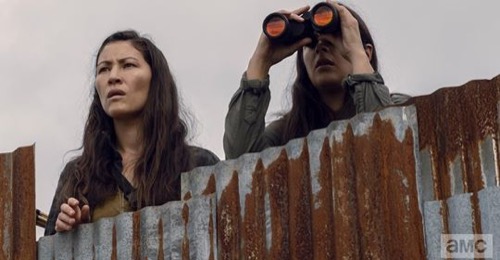 Tonight on AMC our favorite show The Walking Dead airs on an all-new Sunday, February 17, 2019, episode and we have your The Walking Dead recap below. On tonight’s The Walking Dead Season 9 episode 10 called, “Omega,” as per the AMC synopsis, “A captive or a refugee? A new arrival at the Hilltop opens up about the leader of a group of mask-wearing savages. A search party sets out on a daring mission to find two missing friends”

On tonight’s episode, a group of people all hide out in the basement. They cannot leave because they will get sick. They are all scared, Lydia tells Henry as she shares her story of when she was younger. Daryl listens outside of the prison window. They both talk about how strong their mothers are with Lydia wanting that no-one wants to mess with her mother.

Tara and the group arrive to see a herd of walkers as they search for Alden and Luke in the woods. They take out the herd on the lookout for the whisperers. They don’t find any. Tara tells them they need to head back home and come up with a plan after they find Alden and Luke’s horses dead and cut open.

Lydia asks Henry why he is being nice to her. She tells him about how she is hopeless because of her father. She tells him about how her dad became pessimistic when the world turned but her mother didn’t. Henry talks about Carol and the Kingdom. Daryl arrives just in time to get him to stop talking. He pulls Henry out of the prison, yelling at him for putting the others at risk. Henry gets mad when he realizes they were using him to get dirt on her.

Daryl sits and talks with Lydia. She shares a little with him about how they hid in a basement at the start of the turning of the world and how her dad used to sing to her when she was scared. She shares how her mother suffocated a panicked member in their group so that he wouldn’t alert walkers outside. Daryl gives her a ladle of food through the bars. She grabs his arm. He stops her quickly and notices injuries all over her arms.

The newcomers decide they need to head out and find Luke. They owe him that.