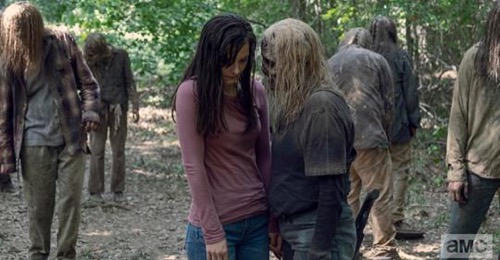 Tonight on AMC our favorite show The Walking Dead airs on an all-new Sunday, March 3, 2019, episode and we have your The Walking Dead recap below. On tonight’s The Walking Dead Season 9 episode 12 called, “Guardians,” as per the AMC synopsis, “One of the communities struggle to ease tensions that threaten to divide from within, the true nature of another group comes into focus, and a mission to rescue a friend has deadly consequences. “

Lydia and her mother walk alongside the dead in the woods while her mother questions her about Daryl and the others. Lydia tells her she got them to trust her. She tells her mother about their farmlands and their basic weapons. Lydia wants to know if her mother came to get her for information or because she wanted her daughter back.

Michonne scolds Gabriel and the others for going out and trying to fix the lines for the walkie talkies. She reminds them that Jesus is dead. Aaron reminds them that there is a new enemy out there but there is a reason they made Michonne head of security. Sidiq talks about Carol and her invitation to their fair. Michonne warns them that the roads there are not safe especially with the whisperers out and about.

Rosita cannot snap her jeans due to her growing belly. Gabriel comes home. He tells her about their council meeting but doesn’t want to talk about it. They talk about the strangeness between them now that she is pregnant.

The whisperers stop for a break on their travels when one of them sees Henry lurking around. Beta grabs him. He tells them he is from Hill Top. Lydia knocks him out with a punch.

Eugene brings Gabriel a few charts he has created to show what Gabriel should do when it comes to raising Rosita’s baby with her. Gabriel shows his appreciation, humoring Eugene who tells him he would be crazy to let her go. He has been head over heels in love with her. He hands Gabriel some new stretchy pants for Rosita’s growing bread basket.

Lydia and her mother walk with the herd while they talk. She senses Henry likes her daughter otherwise why did he come all this way. Alpha reminds her that the group lied to her, that is what they do. She hands her daughter an apple. They arrive at their camp where there are more than 100 others.

Michonne finally comes to see Negan in his cell. She laughs at him. She knows he went out into the world and realized how it has changed and came back. He agrees. He wants a little trust. She is losing control of Alexandria and he can help.

Michonne laughs at Negan for suggesting she trust him. Meanwhile, Connie and Daryl continue to try and track down Henry with the dog.

Henry watches Beta make new skins for Lydia. Alpha shows up and tells him this is how they have adapted. Her people come up and accuse her of changing the rules, going back for her daughter isn’t what they do. They all get into a whispered argument. One female from the group argues with Alpha who cuts her head off in front of the others. She holds it up for the others to see. Henry watches horrified while tied to a tree. Alpha then moves in on the woman’s boyfriend and hands him the head. She tells him not to cry. Then stabs him in the side.

Michonne talks to Judith and asks her if she has been talking to Negan. Judith admits she talks to him and he listens to her. He is human. Michonne tells her he is a monster. He has done bad things. Judith thinks he has changed. He hasn’t, Michonne says before Judith points out that she has. Michonne sends her to her room.

The whisperers clean up the bodies by bringing them to the dead. Daryl and Connie watch from the bushes.

Gabriel shows up at Rosita’s where Sidiq is. They all smile at one another in understanding.

Michonne visits Aaron to thank him for having her back at the meeting. She tells Aaron she won’t argue if some of their people want to go to the fair. Aaron doesn’t know if this is a good idea. What about the people with the skins?

Beta grabs Henry from the tree and drags him to Lydia and Alpha. Alpha gives her a knife. She tells her to kill Henry. Lydia doesn’t want to. Suddenly a number of walkers rush into the camp and attack. Daryl swoops in unnoticed and grabs Henry who forces Lydia to go with them.