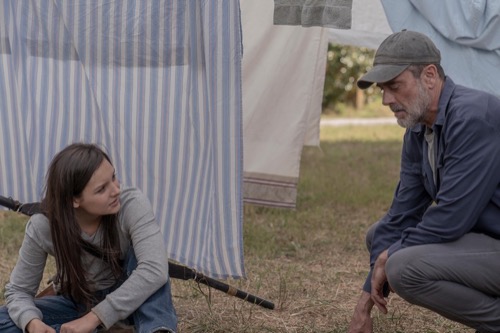 The episode opens with some heartwarming scenes of Michonne, and Daryl having dinner with the children. Carol Is bandaging her wrist and goes to the door and takes a dinner tray that Daryl left for her.

Ezekiel is trying to sleep, but he hears noises outside that wake him. Many others wake up and meet him outside. A roof collapsed, nine are injured. The infirmary only has enough room or four.

Aaron is training, trying to get every able to defend themselves.

Michonne is riding a horse, Judith is in a carriage, made out of an old car, beside her and asks her about the bandage on Carol’s wrist. Michonne explains what happened with Alpha because they crossed her borders. Judith asks if they can live with the skins, Michonne says they seem to think they can, but she doesn’t think so. Michonne sees something, they stop, she looks with her binoculars and tells them it is Ezekiel. Michonne tells them to leave, she is going to go see Ezekiel.

Michonne catches up with him, he is standing on the edge of a drop-off, he turns to look at Michonne, he hugs her, and then he kisses her. He says he is sorry.

Lydia is kneeling on the ground, Negan shows up and she tells him she is being bullied again and her killing them with kindness as he said is not working. All of sudden, Daryl is there and tells Lydia to get up and go with him. Negan tells Daryl that she is just trying to fit in. Daryl and Lydia are walking, he tells her to stay away from Negan – they look over and see the painting on a door, “silence the whisperers.”

Ezekiel and Michonne are talking, he says he lost his kingdom, he failed. And Carol, he doesn’t even know how to talk to her anymore. Michonne tells him that she has been in a state like he is now, sometime before, it is a dark place.

Michonne goes on to tell Ezekiel it is hard to go on the second time around, especially when you are used to having someone around who is your rock. Then she says for what is worth, he is not that bad a kisser. And, next time he feels this way, he asks her to promise that he won’t go out by himself.

Lydia goes into the kitchen where people are eating, she sits down at the table where the guys are that were bullying her, she brings in a dead squirrel and slices it open in front of them to scare them. Afterward, Daryl tells her she can’t do things like that.

Margo and the guys attack Lydia, they beat her. Negan comes in to save her and pulls Margo off her, he swings Margo against a wall. Daryl, Aaron and the rest show up, Negan is being blamed for Margo’s head being smashed against a wall. Lydia keeps screaming that it isn’t his fault.
Daryl goes to see Lydia in the infirmary and tells her that he is so sorry that this happened to her. She tells him that Negan saved her life.

Daryl goes to see Negan, tells him that Lydia is banged up but she will be alright. Negan says screw Margo, they are better off without her when she was beating up on a kid. Daryl asks why he helped Lydia, he is no hero.

Carol is outside talking to Daryl, she says she heard what happened – everyone is talking about Negan again, it’s like time never moved. Daryl says he believes Lydia.

Back at Alexandria, the walkers are getting in after the building collapse; they seem to be coming from everywhere. They have to protect the wall, but they need help – they are not going to be able to do it on their own. Just when they lock one door, another wall collapses and more walkers are now coming right inside. Just in time, Michonne and Ezekiel arrive to save the day.

The boys who attached Lydia sit at a table with the council to discuss what happened with Lydia; they claimed she attacked them.

Daryl is talking to Michonne – she tells him to protect Lydia at all cost if she runs away and Alpha finds her, she will hurt her. She tells him to be her proxy when the council votes.

Daryl goes to see the council, he says that Lydia said Negan saved her and he believes her. It’s a tie, Gabriel is the deciding vote, he says he is taking the night to clear his head and consider his vote and suggests everyone do the same.

The next day, Gabriel goes to see Negan in the cage, he is gone.

Lydia comes out the door, she sees Gabriel and Aaron talking – she tells them she did it, she let Negan out.

Daryl later finds Lydia in the cage, he tells her to get out, she didn’t let Negan out – she didn’t leave the house the night before. She says it doesn’t matter, this is where people want her to be. She goes on to say that her mother told her that people here where polite faces but they are not what they look like. He tells her she doesn’t belong in a cage, she says she will be safer.

Michonne sets out with Judith to try to get more information about the mask that was found near the ocean. But the biggest news this episode, Negan has flown the coup! Will he join Alpha?