The Young and the Restless: Monday, May 6 – Victor Reveals Adam Back From The Dead, Nikki Heads to Vegas – Summer Trap Kyle

BY Heather Hughes on May 3, 2019 | Comments: one comment
Related : Soap Opera, Spoiler, Television, The Young and the Restless 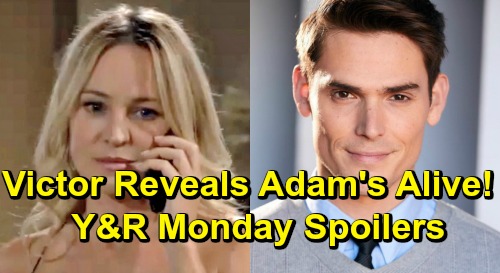 The Young and the Restless (Y&R) spoilers for Monday, May 6, tease that Sharon Newman (Sharon Case) is in for the shock of her life. She’ll get updates on Adam Newman’s (Mark Grossman) survival and wonder how this is even possible. Victor Newman (Eric Braeden) will have the answer to that question and any others that Sharon might throw at him. He’ll explain this strange situation as best as he can.

Once Sharon has heard Victor’s spiel, she’ll contemplate how huge this is for the people of Genoa City. Adam’s return would shake things up for so many characters in town. Of course, he needs his memories before he can truly get his life back on track.

The Young and the Restless spoilers say Sharon will reflect on her relationship with Adam and what he meant to her. She’ll let Rey Rosales (Jordi Vilasuso) know what the big secret is, so it’ll be relayed to Nikki Newman (Melody Thomas Scott) one way or another. Since the jig is up, Victor may just call Nikki and come clean. Then again, Rey could get a call first and admit it before Victor has the chance.

Regardless, Nikki will be just as floored as Sharon when she hears the truth. It’s even possible Nikki will just show up to get the news in person. The Young and the Restless spoilers say Nikki will definitely take a trip to Las Vegas soon, so she’ll at least be around to get confirmation on this crazy twist.

Back in Genoa City, Summer Abbott (Hunter King) will likely drop a bomb on Kyle Abbott (Michael Mealor). In Friday’s Y&R episode, Summer gets a call about a meeting in New York. She eagerly promises to make it there with Kyle tonight, so she’s clearly hoping this unexpected trip can help win him over.

It looks like Summer will fill Kyle in on Monday, and you can bet he’ll be uncomfortable. Kyle would rather create some distance right now, but Summer doesn’t know the meaning of the word “boundaries.” Lola Rosales (Sasha Calle) may be uneasy over their New York trip as well. After all, a lot can happen in one night!