BY Heather Hughes on May 2, 2019 | Comments: 4 comments
Related : Soap Opera, Spoiler, Television, The Young and the Restless 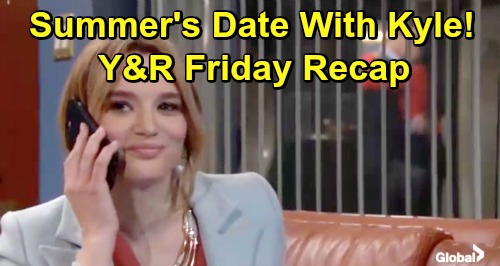 The Young and the Restless (Y&R) spoilers for Friday, May 3, tease that Sharon Newman (Sharon Case) will get a rough night’s sleep in Vegas. When Rey Rosales (Jordi Vilasuso) mentions it in the morning, Sharon will admit she’s got a strange feeling. She won’t be able to put her finger on it, so their mission will press on.

At the psychiatrist’s office, Sharon and Rey will seek info on Victor Newman (Eric Braeden). The doc won’t want to answer their questions, but Rey will knock a briefcase off his desk. After cash spills out, Rey and Sharon will head for the exit. That’ll leave the doctor to get in touch with Victor about their visitors.

Back with Rey, he’ll get a call from Nikki Newman (Melody Thomas Scott). She’ll suggest she’s got a new lead to pass along. Nikki will point Rey in the direction of a woman named Riza Thomas. Meanwhile, Victor will meet with Riza at a bar. He’ll mention that Spider disappeared and wonder if she knows where he went.

Riza will be hesitant to divulge anything, but Victor will promise he doesn’t want to hurt Spider. Y&R spoilers say Riza will snap that Vic already has. She’ll think Spider was doing great until Victor came along and messed things up for him. It seems Spider is actually Adam Newman (Mark Grossman), so it’s easy to see why Victor’s so determined to track him down.

Next, Riza will notice an incoming call from Rey Rosales. The Young and the Restless spoilers say Victor will warn her not to pick up. He’ll insist he can handle this, so he’ll find Rey and Sharon’s hotel room a little later. After sending Rey out, Victor will urge Sharon to sit down and admit there’s something she should know.

In Genoa City, Summer Abbott (Hunter King) will show up at Jabot and remind Jack Abbott (Peter Bergman) that she still wants to work there. After Billy Abbott (Jason Thompson) brings Rebekah Barlow (Jennifer Taylor) in, a meeting will get underway. Summer and Kyle Abbott (Michael Mealor) will end up bouncing some good ideas off each other, so they’ll be a solid business team as usual.

At Society, Lola Rosales (Sasha Calle) will worry when Mariah Copeland (Camryn Grimes) shows up for a live spot. She’ll want to do an interview, but Lola will admit she’s never been on TV before. Mariah will offer reassurance, so Lola will agree to speak along with Abby Newman (Melissa Ordway).

The interview will go well, which won’t surprise Kyle when he arrives. He’ll contend that Lola’s always perfect. They’ll allude to last night and shoo Mariah away so they can be lovey-dovey in peace. At Crimson Lights, Mariah will get a disturbing text on her phone. The sender will insist that he or she won’t be ignored and add that Mariah will soon know his or her pain.

Mariah will naturally look rattled by the latest message. When a man suddenly brushes past her, Mariah will snap at him. It appears it’ll just be a moment of paranoia, but it’s clear that this threat is quite dangerous.

Across town, Rebekah will meet up with Nick Newman (Joshua Morrow). She’ll kiss him, but she’ll also pick up on a weird vibe. Rebekah won’t think Nick’s all that comfortable being single or just hooking up. She’ll suggest that she likes to keep things casual, but she won’t want to force that mentality on Nick. Rebekah will give Nick some advice on finding happiness again instead.

At Jabot, Summer will find Dina Mergeron (Marla Adams), who apparently took a cab by herself. Dina will be confused, but Summer will do her best to help. Once Kyle appears and pitches in, they’ll take Dina home and get her set up with a movie.

After returning to the office, Kyle will reconvene with Lola. He’ll be grateful for the tablet she brought back to him. Kyle will also express gratitude to Summer over the Dina situation. While Lola and Kyle are busy kissing by the elevator, Summer will get a call about a meeting in New York. She’ll assure the person on the other end that she can be there with Kyle tonight.