The Young and the Restless Spoilers: Abby Explodes Over Nate’s Role in Victor’s Fake Demise – Cruel Betrayal Tears Them Apart? 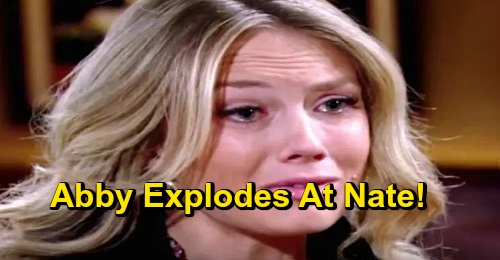 The Young and the Restless (Y&R) spoilers tease that big trouble is brewing in Abby Newman’s (Melissa Ordway) relationship. Y&R fans know Abby and Dr. Nate Hastings (Sean Dominic) have already had a few issues. It took a lot of hard work on Nate’s part to even get out of the friendzone.

Nevertheless, Nate saw something special in Abby and was convinced they could be more than pals if she’d just put her heart out there. Abby finally took the leap, but her own insecurities got in the way. Nate was ready to move full-speed ahead in this romance, but Abby’s been burned too many times to move quickly. She needed to slow the pace, so Nate decided he was willing to play by her rules.

Now Nate and Abby are back on track, but a shocking secret could put their relationship in jeopardy. The Young and the Restless spoilers say Victor Newman’s (Eric Braeden) demise will rock Genoa City, but “The Moustache” won’t really be gone for good. This is all a sneaky scheme, so the fake death plot is bound to have major consequences.

There’s no confirmation on who’s in on this scheme and who’s in the dark, but some Newman family members appear genuinely devastated. Nikki Newman (Melody Thomas Scott) and Nick Newman (Joshua Morrow) share a look at one point that suggests they’re in the loop, so Victor may have briefed them on his plan. As for the rest of the Newmans, it seems they’ve been left out to protect the secret.

Of course, faking Victor’s death wouldn’t be possible without Nate, who assures the family he did everything he could in the episode airing September 16. Since Abby apparently believes her dad is dead, she’s bound to be furious when Nate’s deception is revealed. Doctor-patient confidentiality is one thing, but Nate isn’t even telling the truth about Victor’s condition. He’s lying for his patient and hurting his girlfriend in the process.

It wouldn’t be surprising if Abby broke up with Nate over this. Abby could surely keep the secret, but Victor and Nate seemingly didn’t trust her enough to tell her. That lack of trust could be important after all this blows up.

Naturally, Abby won’t be able to trust Nate either after something like this. He was obviously put in a position where he had to choose loyalty to Victor or loyalty to Abby. The fact that Nate put Victor’s plot above Abby’s feelings probably won’t fly with her. He could’ve easily made that part of the deal and insisted he wouldn’t help unless Abby was filled in.

The Young and the Restless spoilers say the real point of all this seems to be duping Adam Newman (Mark Grossman), but there’ll inevitably be backlash – as there should be! Why should Victor’s other loved ones have to be put through this kind of emotional turmoil?

It’ll be interesting to see if Nate and Abby’s relationship can survive this betrayal. We’ll give you updates as other Y&R news comes in. Stay tuned to the CBS soap and don’t forget to check CDL often for the latest Young and the Restless spoilers, updates and news