BY Heather Hughes on December 7, 2019 | Comments: one comment
Related : Soap Opera, Spoiler, Television, The Young and the Restless 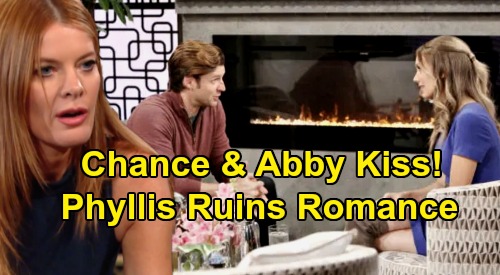 The Young and the Restless (Y&R) spoilers tease that Abby Newman (Melissa Ordway) will grow closer to “Chance” Chancellor (Donny Boaz). Sparks started flying between them from the moment Chance hit town again, so Abby’s been eager to remain in his orbit. She offers him the head of security gig at the Grand Phoenix on December 9, which he agrees to think about.

It sounds like Abby and Chance will continue to mix business and pleasure. They made a great team during the Simon Black (Jeffrey Vincent Parise) bust. Chance came through for Abby on pushing Phyllis Summers (Michelle Stafford) out of the hotel partnership as well. Working together could bring some complications, but Abby’s focused on spending as much time as possible with Chance.

Of course, Chance and Abby need to go on their first date before they get too excited. Flirting is one thing, but you really have to sit down and dig a little deeper. It’s the only way to see if it’s a crush or a real connection. Fortunately, it’ll be the latter for Abby and Chance. They’ll head out to dinner when their first date finally arrives – and the whole evening will be a huge success.

The Young and the Restless spoilers say Abby will open up to Chance about her family’s background and he’ll do the same. They’ll be able to relate to each other and will enjoy each other’s company. Abby will confess that Chance probably wouldn’t have liked the former version of herself. She’ll be glad he knows her in the here and now instead.

Chance will grow more enamored with the lovely blonde in front of him by the second. He’ll be drawn in by Abby’s beauty, charm and can-do spirit. Before their first date wraps up, Chance will admit he’s been wanting to plant a kiss on Abby all night. Abby will decide to do it for him when she grabs Chance by the lapels and pulls him in for a smooch.

It’s safe to say they’ll both enjoy this lip lock and will likely agree to another date soon. Abby will have a good feeling about where this is headed, but will secrets spell trouble? Y&R fans know Chance is hiding something big that went down in Vegas. Since Chance helped Abby shove Phyllis out of the picture, Phyllis is bound to be more vindictive than ever.

Will Phyllis set out to destroy Abby and Chance’s shot at happiness? She certainly could! It’s worth mentioning that Boaz tested with both Stafford and Ordway during the auditioning process. Although Phyllis is drifting back toward Nick Newman (Joshua Morrow) right now, don’t count her out of the game when it comes to Chance! You never know what kind of flame will burn down the road but Y&R buzz is that Phyllis will involved.