The Young and the Restless Spoilers: Week of December 9 Preview – Chelsea Forced to Pick Adam or Nick – Devon Blindsides Elena 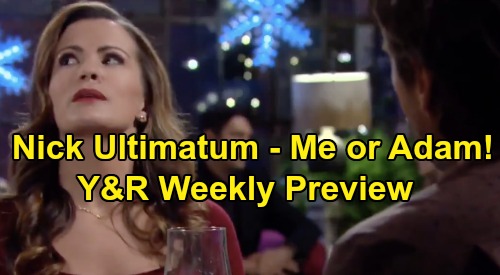 Pretty much everyone can see a “Chadam” reunion coming from a mile away. After Devon Hamilton (Bryton James) heard about Chelsea moving in with Adam Newman (Mark Grossman), he wondered how long Nick could go on like this. Not long apparently! It looks like Nick’s on the verge of giving Chelsea an ultimatum.

During a chat over ice cream sundaes, Victoria Newman (Amelia Heinle) will voice her fears. She’ll want to protect Nick’s heart, so she’ll be honest with him about the situation. Victoria will basically think Chelsea wants to have her cake and eat it, too. Nick feels like Adam’s taking advantage of Connor Newman’s (Judah Mackey) situation, but Victoria will think Chelsea’s taking advantage of Nick. She may suggest that Nick needs to stop being a pushover and make it clear where he stands.

Victoria will argue that Chelsea is either with Nick or she’s with Adam. She’ll insist Chelsea can’t have it both ways – and it seems Nick will agree. Later, Chelsea will meet up with Nick for another strained conversation. He’ll probably wonder when Chelsea’s moving back home, but she won’t be able to give him a firm date on that. Chelsea will still feel like Connor needs both his parents under one roof.

Nick will grow frustrated since there seems to be no end in sight. He may contend that it’s not fair to just leave him stuck in limbo like this. Y&R’s weekly preview video shows an irritated Nick asking, “Are you going to live with your ex-husband until your kid goes off to college?!”

The Young and the Restless spoilers say Chelsea will roll her eyes and perhaps view Nick as too insecure. She may reiterate that nothing’s going on with Adam, but Nick won’t be so sure. Regardless, it’s not like Chelsea and Nick can have much of a relationship when she spends all her time with Adam.

Nick will eventually admit he doesn’t know if he can keep doing this. If Nick forces Chelsea to choose between him and her son, we can all guess who she’ll choose. Connor comes first for Chelsea, so she’ll let this relationship blow up in a heartbeat if she has to.

Over with Elena Dawson (Brytni Sarpy), she’ll be stunned when Devon seemingly tries to break things off. Elena will express confusion, so Devon will clarify that he thinks she deserves to be with somebody better. You can bet Elena will put up a fight, but it’s clear that Devon’s going through a lot right now. Between getting scammed out of his fortune and having a Hilary Hamilton (Mishael Morgan) lookalike in town, Devon’s pretty much spinning out.

Will Devon continue to push Elena away? Will he stand by this breakup idea or will Elena convince him to stick together? Whatever the case, The Young and the Restless spoilers say Devon will turn his attention to scoring dirt on Amanda Sinclair (Mishael Morgan). It’ll become his priority, so Elena’s going to take a backseat for a while.

It sounds like another action-packed week is coming up. We’ll give you updates as other Y&R news emerges. Stick with the CBS soap and don’t forget to check CDL often for the latest Young and the Restless spoilers, updates and news.