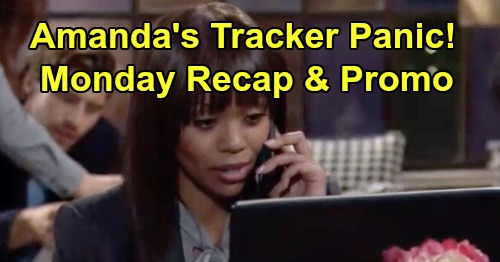 The Young and the Restless (Y&R) spoilers recap for Monday, December 9, teases that Mariah Copeland (Camryn Grimes) will face off with Summer Newman (Hunter King). At Jabot, Mariah won’t be pleased to find Summer instead of Kyle Abbott (Michael Mealor). She’ll decline to let Summer pass along the gift she wanted to drop by.

After Mariah brings up Theo Vanderway (Tyler Johnson), Summer will admit they split. Alarm bells will immediately go off for Mariah, who’ll think it’s dangerous for Summer to be single. Mariah will worry about Summer making trouble for Kyle, which will offend Summer.

Of course, Mariah won’t be bothered by Summer’s outrage. She’ll think Summer was using Theo to make Kyle jealous anyway. Summer will decide she’s had enough and will be upset that Mariah isn’t respecting her feelings.

At the Grand Phoenix, Abby Newman (Melissa Ordway) will assure “Chance” Chancellor (Donny Boaz) that she’s not actually a jewelry thief. It was all a plot to push Phyllis Summers (Michelle Stafford) out. Abby will crush some of the fake jewels as proof and will acknowledge that the “victims” were paid to play along. She’ll realize it was a risk to bring Chance into this, but he came through on the evidence.

When Abby asks if Chance will arrest her for her scheme, he’ll point out that filing a false police report is a felony. Abby will counter that she never really called the cops. She’ll hope she can make things up to Chance, but he’ll come clean about figuring it out from the get-go. Chance will joke about Abby making a great outlaw, so she’ll think they should toast to their success as a team.

Next, Y&R spoilers say Abby will have an offer for Chance. She’ll push him to become her new head of security, so Chance will agree to mull it over. At Society, Amanda Sinclair (Mishael Morgan) will close her laptop as Devon Hamilton (Bryton James) approaches. He’ll point out that he could hire an investigator to uncover what Amanda’s hiding. Devon will still want his money back, but Amanda will reiterate that she doesn’t have it.

Amanda will also wonder if she should get a restraining order, but she’ll expect Devon to apologize eventually. Since Amanda’s there for a meeting, she’ll urge Devon to exit. By the door, Elena Dawson (Brytni Sarpy) will witness their encounter and take off. Devon will go after her, so they’ll end up clashing at Crimson Lights.

Elena won’t be pleased that she found Devon with Amanda when he said he’d be working. Devon will bring up Colin Atkinson’s (Tristan Rogers) scam and how it hurt the people he wanted to help with that money. He won’t get why Elena would expect him to just let it go.

Elena will confess Nate Hastings (Sean Dominic) made her see that her view of Amanda was a bit harsh. She’ll ask if Devon’s attracted to Amanda, but he’ll vehemently insist he isn’t. Elena will feel like it must be an obsession then. The Young and the Restless spoilers say Devon will rant about Amanda being nothing like Hilary Hamilton (Mishael Morgan). He’ll hint that Elena’s looking for a way out of their relationship, but she’ll feel like he’s the one creating the distance.

Elena will present Devon with the choice he has to make. Does he want Elena or to live in the past with his anger? Devon will be contemplating that when Mariah finds him alone later. He’ll confide his troubles and admit he’s struggling to get over one of the scammers looking like Hilary. Mariah will back Devon up when it comes to his concerns about Amanda. As for Elena, Mariah will think Devon needs to tell her how much she means to him.

Back with Amanda at Society, she’ll warn Phyllis that her wrongful dismissal case could go on for years. Amanda won’t be very interested since Phyllis is such a troublemaker. Phyllis will snap that she’ll take care of it herself and head for the door. Once Amanda’s alone, she’ll look concerned as she gets on her laptop again. Amanda will call someone in fear that the tracker might’ve been found and destroyed.

Afterward, Elena will pop in and ask for a fresh start with Amanda. They’ll be in agreement on that before Elena mentions Amanda looked upset earlier. Amanda will downplay things a bit, and Elena will run into Devon as she leaves. She’ll point out she was having a civilized conversation and push Devon to try it. As for Amanda, she’ll breathe a sigh of relief when the tracker starts working again.

At Jabot, Phyllis will pay Summer a visit and grumble about getting fired. She won’t be happy Amanda turned her away either, but Summer will snark about some of Phyllis’ misdeeds. Once Phyllis gets emotional, Summer will realize this is all hitting her pretty hard. However, she’ll be bummed when Phyllis defends herself as playing the cards she was dealt. She’ll feel like her mom’s just doubling down.

Their discussion will eventually shift to Kyle, so Phyllis will point out the obvious: Summer is still in love with him. Nevertheless, Summer will be adamant that she only wants a working relationship with Kyle. The Young and the Restless spoilers say Phyllis will embrace Summer as a show of support.

It sounds like some great scenes are coming up. We’ll give you updates as other Y&R news emerges. Stay tuned to the CBS soap and don’t forget to check CDL often for the latest Young and the Restless spoilers, updates and news.