BY hellodrdavis on December 7, 2019 | Comments: 2 comments
Related : Soap Opera, Spoiler, Television, The Young and the Restless 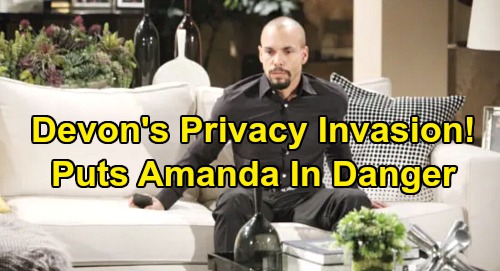 The Young and the Restless spoilers tease that Devon Hamilton (Bryton James) will soon find himself more interested in Amanda Sinclair (Mishael Morgan) than ever. As Y&R viewers know, Devon has been suspicious of Amanda ever since she came on the Genoa City scene. Since she looks just like Devon’s deceased wife Hilary Hamilton (Mishael Morgan) and since she was involved in what turned out to be a scam to steal Devon’s fortune, he’s been deeply worried about who sent Amanda his way and why. And he’s still not convinced that Amanda was an innocent victim in the whole thing.

Of course, it doesn’t help matters any that Amanda doesn’t seem to have any digital footprint. Y&R viewers will remember that Devon initially tried to track down information about Amanda’s past, to no avail. She didn’t even have a photo on her law firm website, which seemed odd for a high-powered attorney with an active law practice. But viewers have become privy to something that Devon is not – Amanda has a tracking device planted on someone.

Amanda’s been pretty circumspect about the whole thing, but viewers have seen Amanda tracking the person, whom she refers to simply as “him,” on her computer and talking to someone on the phone about this mystery person. And since Amanda has also made comments here and there about wanting privacy and having experience with controlling men, Y&R buzz says seems like she’s clearly running from someone from her past – perhaps and abusive ex.

Well, despite Devon’s prior investigations into Amanda’s background, he’s turned up very little. But recently, Victor Newman (Eric Braeden) decided to take matters into his own hands after meeting Amanda, and he phoned someone on his payroll to do a complete background check on Amanda and provide a full dossier on her. According to The Young and the Restless spoilers, Victor will present the spy dossier to Devon as a favor, along with some disturbing findings.

Exactly what Devon will learn from the dossier remains to be seen, but it appears that some things about Amanda won’t add up. Of course, if Amanda is indeed running from someone, then she may have purposely hid information about her past, and for all we know she could be even operating under an assumed name. Whatever the case, Devon will probably feel a bit vindicated about his suspicions about Amanda, and he’ll want to find out more.

According to Y&R spoilers, Devon will use the information he’s been given and dig for dirt on Amanda. But what’s he going to find, and might his investigation end up putting Amanda in serious danger? If she is trying to hide from someone for her own safety, then Devon’s actions could put her directly into harm’s way, especially if he goes snooping around and talking to the people who used to know Amanda.

It’s possible that Devon might actually run into this mysterious person whom Amanda is trying so desperately to avoid and lead him directly to her. Time will tell what happens here, but it’s sure looking like he’s about to stir up some big trouble for Amanda and possibly Devon himself. What do you think Amanda’s hiding? Stay tuned to the CBS soap and don’t forget to check CDL often for the latest Young and the Restless spoilers, updates, and news.