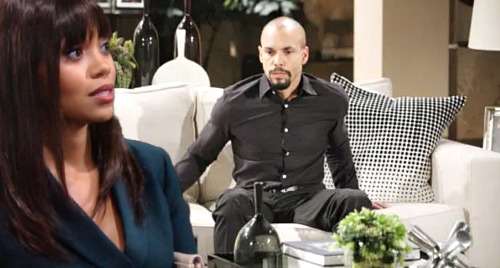 The Young and the Restless (Y&R) spoilers tease that Devon Hamilton (Bryton James) will find himself increasingly drawn to Amanda Sinclair (Mishael Morgan), and he won’t like it at all. Devon will undoubtedly feel like he’s betraying both of his loves. He’ll feel guilty since he’s in a committed relationship with Elena Dawson (Brytni Sarpy) and truly wants a future with her.

Devon may also feel like he’s disrespecting Hilary Hamilton’s (Mishael Morgan) memory by obsessing over someone else with her face. Amanda may look like Hilary, but they aren’t the same person. Y&R fans can certainly attest to that! Hilary was a firecracker that many of us loved or at least loved to hate. Amanda doesn’t have that same spark, but there’s still time to bring out more of her personality.

The fact that Amanda’s been so cagey has probably hindered things a bit. It’s tough to connect to a character you can’t get to know. However, that caginess will be an important part of the story. The Young and the Restless spoilers say Devon will struggle over all these tempting thoughts of Amanda. He’ll hate what this is doing to him, so he’ll most likely decide he wants Amanda gone ASAP.

The fortune Katherine Chancellor (Jeanne Cooper) left Devon may be missing, but it’s not like he’s strapped for cash. Devon still has the very successful Hamilton-Winters and all the money it’s made him. He’s got more than enough to pay for some help in digging for dirt.

Of course, Devon’s a guy who likes to research and find out things for himself as well. He may decide to tackle this challenge alone or at least remain part of the search efforts. Regardless, The Young and the Restless spoilers say Devon will indeed hope for dirt on someone, and it makes sense that’ll be Amanda. He may hope he can blackmail her unsettling, Hilary-looking mug right out of town!

However, Devon might find out something that leaves him more drawn to Amanda instead. She seems to be hiding from an abusive ex based on the clues Y&R’s offered. Will Devon inadvertently send trouble Amanda’s way? Will he try to halt what he potentially sets in motion? It’s easy to imagine Devon stirring things up for Amanda and then taking drastic action to stop it.

The Young and the Restless spoilers say Elena and Nate Hastings (Sean Dominic) will be desperate for a miracle this Christmas. It’s possible they’ll be working on a hospital case that involves another Y&R character, but their miracle hopes point to Devon. It just seems more likely that Elena and Nate would want a miracle for Devon rather than someone they didn’t know all that well.

Will Devon land in danger due to his digging? Will he come to Amanda’s rescue and get injured in the process? We’ll give you updates as other Y&R news comes in. Stay tuned to the CBS soap and don’t forget to check CDL often for the latest Young and the Restless spoilers, updates and news.