The Young and the Restless Spoilers: Abby’s Bitter Revenge, Takes Down Mia in a Big Way – Rival Suffers for Arturo Hookup

BY Heather Hughes on March 23, 2019 | Comments: one comment
Related : Soap Opera, Spoiler, Television, The Young and the Restless 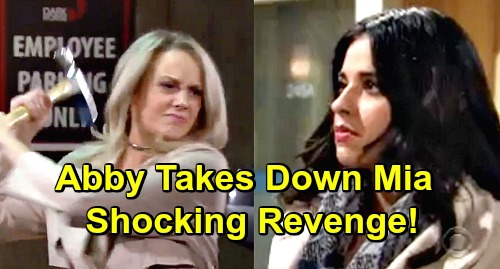 The Young and the Restless (Y&R) spoilers tease that Abby Newman (Melissa Ordway) will unleash her fury. After Arturo Rosales (Jason Canela) confesses to hooking up with Mia Rosales (Noemi Gonzalez), Abby will be livid. She’ll feel like a fool for defending her relationship and acting like she had something special with Arturo.

Of course, Arturo will face a major outburst. Abby will chew Arturo out for betraying her in the worst way possible. This has been Abby’s greatest fear from the moment she heard about Mia and Arturo’s past together. She was concerned history would repeat itself when she found out Mia cheated with Arturo. Now Rey’s been betrayed again and Abby’s fear has come true.

However, Abby’s rivalry with Mia will affect how she handles this crushing blow. There was a time when Abby might’ve sat around and wallowed in self-pity. Her feud with Mia will drive her down an angry, dangerous path instead. Why be miserable when you can get even? That should be Abby’s motto in the coming weeks.

On March 28, The Young and the Restless spoilers say Abby will stick to her guns. She’ll refuse to back down, so that probably means she’ll dismiss Arturo’s apology attempts. He may hope to salvage their engagement and future together, but it’s doubtful Abby will be interested. She’d rather spend her time focusing on revenge.

Y&R fans can expect Abby to grab a hammer and approach someone’s vehicle. Arturo drives a truck, but it appears Abby will go for a car instead. She may target Mia’s vehicle as a nice start to her vengeful plot. Still, that certainly won’t be enough for enraged Abby. She won’t stop until Mia truly pays for what she’s done.

You can bet Abby will make sure Rey knows about the one-night stand. That should lead to some paternity questions, which could be a huge problem if Mia is indeed faking this pregnancy. Even if it’s real and turns out to be Arturo’s baby, there’s going to be trouble.

Rey promised to keep Mia’s attack on Lola Rosales (Sasha Calle) a secret for the kid’s sake. Abby, on the other hand, would turn Mia over to the cops in a heartbeat. She also happens to be friends with Lola, so it’s possible Lola will remember a clue from just before the attack. Something as simple as another mention of the coat Lola was wearing that night might help.

With some deep thought and a little investigating, Abby may crack this case and expose Mia’s violent actions. The Young and the Restless spoilers say Abby won’t stop until she does extreme damage. She’ll want Mia to suffer, so don’t miss the twists and turns ahead.

Are you glad Abby will take charge and make Mia pay? Does Mia deserve whatever she’s got coming? We’ll give you updates as other Y&R news emerges. Stay tuned to the CBS soap and don’t forget to check CDL often for the latest Young and the Restless spoilers, updates and news.