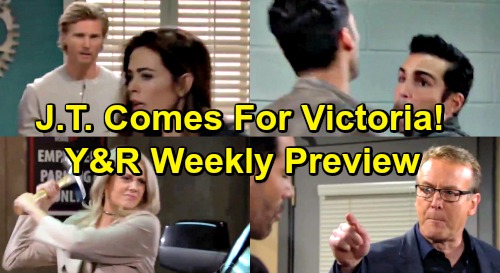 The Young and the Restless (Y&R) spoilers for the week of March 25-29 tease that we’ll see some vengeful moves and total chaos. For starters, the most serious charges against the cover-up crew will be dropped. They’ll face some lingering obstruction of justice issues after their dramatic rescue, but they’ll ultimately score their freedom.

Unfortunately, Victoria Newman (Amelia Heinle) will find that physical freedom isn’t the same as emotional freedom. This whole J.T. Hellstrom (Thad Luckinbill) ordeal has really taken a toll – and it’s not over yet! The Young and the Restless just put out a new weekly promo, which features some shocking scenes. Victoria can be seen crying out after spotting J.T. in her home.

There are a couple of options to consider. One of them is that J.T. will sneak out of the hospital after he’s admitted there. It’s not like the GCPD is ever on top of anything, so that’d be perfectly reasonable. J.T. could slip past the guards and show up to give Victoria a good scare. He might collapse again before he had a chance to do real harm, but it would still be terrifying for Victoria.

However, it’s also possible this will be a vivid nightmare or hallucination. Victoria has suffered severe emotional trauma, so Y&R should really explore that. The Young and the Restless spoilers say Billy Abbott (Jason Thompson) will worry about Victoria’s mental state in the coming weeks. That could line up with a vision of J.T. she just can’t shake.

Regardless, Victoria will still have major problems to tackle. Speaking of problems, Arturo Rosales’ (Jason Canela) will deal with plenty of them. He cheated with Mia Rosales (Noemi Gonzalez), so he’ll pay the price after he comes clean to Abby Newman (Melissa Ordway). She’ll take a hammer to his truck and leave behind smashed windows as well as some dents.

Afterward, the news will make it to Rey Rosales (Jordi Vilasuso). Even though Rey and Mia aren’t together anymore, that won’t matter to this betrayed brother. This isn’t the first time Arturo slept with Mia while she was committed to Rey. That means Rey will show no mercy! He’ll punch Arturo with everything he’s got, but Rey will face a blow of his own when Paul Williams (Doug Davidson) fires him.

Other Young and the Restless spoilers say Kerry Johnson’s (Alice Hunter) storyline will bring some huge twists. She’ll contact her mysterious boss about some final paperwork and then it’ll be go time. It looks like Ashley Abbott (Eileen Davidson) will play a role in the big reveal, so there are two routes Y&R could take. Ashley can either be the hero that exposes Kerry’s scheme or expose herself as the evil mastermind.

Whatever the case, some crazy episodes are coming up this week. We’ll give you updates as other Y&R details emerge. Stay tuned to the CBS soap and don’t forget to check CDL often for the latest Young and the Restless spoilers, updates, and news.