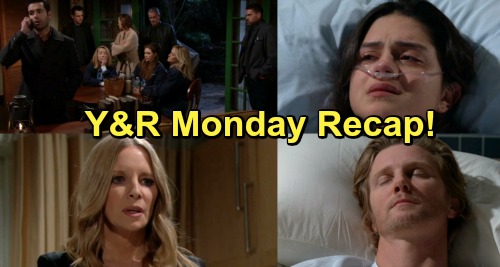 The Young and the Restless (Y&R) spoilers update and recap for Monday, March 25, tease that the cover-up crew will pass out one by one. At the cabin, Victoria Newman (Amelia Heinle) will lose consciousness first followed by Nikki Newman (Melody Thomas Scott). Sharon Newman (Sharon Case) will hobble past the couch trying to get help, but she’ll ultimately fall to the ground and lose consciousness as well.

Outside, Victor Newman (Eric Braeden) and Nick Newman (Joshua Morrow) will join Billy Abbott (Jason Thompson) and Phyllis Summers (Gina Tognoni). They’ll all assume J.T. Hellstrom (Thad Luckinbill) must be inside with a weapon. After they smell gas, the men will start pulling the ladies out before J.T. Hellstrom (Thad Luckinbill) is dragged out last.

Rey Rosales (Jordi Vilasuso) will also arrive at the scene and want to help. He’ll make sure paramedics are on their way and insist on telling Christine Williams (Lauralee Bell) the truth. Victor will feel like they need to come up with another story, but Rey will refuse to lie about the trap they set.

At the police station, Victoria will walk in along with Sharon and Nikki. A livid Christine will demand some answers, so Rey will provide updates. Christine will face Victor’s outburst before delivering orders to Rey. She’ll need some time to figure this mess out, so the Nikki, Victoria and Sharon will be placed in a holding cell.

Before Sharon is taken away, she’ll share a close moment with Rey. Y&R spoilers say Sharon will wonder what’s next, so Rey will suggest maybe the judge will overturn the verdict. He won’t want Sharon to be concerned about the consequences he might face. Rey will just want to make thing right for Sharon and the others.

Later, Victoria will ponder J.T.’s crazy behavior. She’ll think it’s clear that something was seriously wrong with him. At the hospital, Christine will stand at the foot of J.T.’s bed. She’ll stare and most likely contemplate the huge blunder she made.

Meanwhile, Dr. Nate Hastings (Brooks Darnell) will offer better news regarding Summer Newman’s (Hunter King) condition. He’ll feel confident that Summer will make a full recovery. Kyle Abbott (Michael Mealor) will join Summer at her bedside when she wakes up. She’ll speak him briefly before falling back to sleep.

Afterward, Mariah Copeland (Camryn Grimes) will drop by to support Kyle. She’ll realize he’s stalling, so she’ll push him to go tell Lola Rosales (Sasha Calle) the truth. In Lola’s room, she’ll be thrilled when Kyle enters to see her. Lola will want a kiss, but Kyle will insist that he has to explain a few things.

The Young and the Restless spoilers say Kyle will spill the story of how Lola desperately needed a donor. Summer was the only match, so Kyle did what he had to do. He’ll admit that he married Summer to secure the transplant. Lola will wonder if Kyle slept with Summer as well, so he’ll confess that he did. Kyle will maintain that he was doing whatever it took to keep Summer on board.

A distraught Lola will suggest that she’s tired and push Kyle to go. Lola will express gratitude for the lifesaving gesture, but she’ll think Summer needs Kyle right now. The Young and the Restless spoilers say Kyle will cry as he exits the room. Poor Lola will do the same in her hospital bed.

Back with Summer, she’ll face Mariah’s judgment. Summer will assume Mariah hates her, but Mariah will suggest it’s gone beyond that now. At this point, Mariah will just feel sorry for Summer, who clearly has major issues.

At the athletic club, Jack Abbott (Peter Bergman) will question Kerry Johnson (Alice Hunter) about a call from “PC.” Kerry will manage to change the subject and turn on the charm with Jack. She’ll suggest that Jack’s the reason she’s not just a workaholic.

Next, Jack will be summoned to help with Dina Mergeron (Marla Adams) at home. Traci Abbott (Beth Maitland) will suggest that Dina’s been looking for Ashley Abbott (Eileen Davidson), so Jack will remind her that Ashley is in Paris. Dina will remain upset and wonder when Ashley’s coming home.

Back at the club, Phyllis will corner Kerry and ask about someone named Dominique Caroll. There was some mail with her name on it, so Phyllis will want the scoop. Kerry will claim it’s her intern, which will raise red flags for Phyllis. She won’t like that she’s just now finding out about this, so Kerry will suggest Phyllis doesn’t trust her.

Once Phyllis heads out, Kerry will get in touch with her secret boss. She’ll text about the final paperwork and insist that they’re all set. Finally, Mia Rosales (Noemi Gonzalez) will remind Arturo Rosales (Jason Canela) that his secret’s on the line. Since Rey is kicking her out, she’ll be desperate for Arturo’s help getting back together.

Arturo will contend that he just might tell Abby Newman (Melissa Ordway) about their hookup himself. He won’t like this power Mia has over him, so Arturo will indeed confess to Abby soon enough. We’ll keep you posted as other Y&R details emerge. Stay tuned to the CBS soap and don’t forget to check CDL often for the latest Young and the Restless spoilers, updates and news.