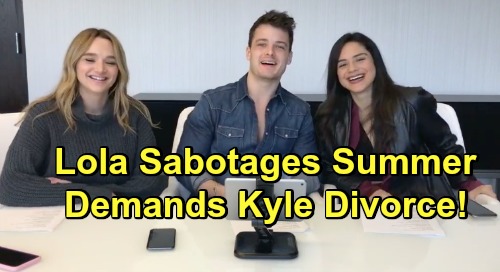 The Young and the Restless (Y&R) spoilers tease Lola Rosales (Sasha Calle) will face some struggles. In the coming weeks, Lola will have to recover from a liver transplant as well as a broken heart. Kyle Abbott (Michael Mealor) assured Summer Newman (Hunter King) that he would honor their agreement after the surgery. A deal is a deal, so Kyle claims he’s in this for the long haul.

Kyle certainly seems to have feelings for Summer, but it’s Lola that he’s given his heart to. He’s still very much in love with Lola, so that’ll play a big role in the story to come. The fact that Summer saved Lola’s life will make things even more complicated. Lola will be grateful to Summer, but she’ll obviously be upset about the marriage Kyle was forced into – but were there is marriage there can be divorce!

Before Lola ended up in a coma, Y&R kept pushing a major theme. Lola had given up on a romance with Kyle, but Mariah Copeland (Camryn Grimes) convinced her to fight for their future. Of course, Lola gave up again after she spotted Kyle kissing Summer at the cabin.

That led to another pep talk from Mariah and Tessa Porter (Cait Fairbanks). They pointed out that Lola said she was going to fight, but it looked like Summer was the one doing all the fighting. Lola resolved to try again with Kyle, which is what put her next to the Abbott pool and in Mia Rosales’ (Noemi Gonzalez) vicious path.

Lola’s coma took her out of the game, but she’ll face a familiar choice soon. Will she throw in the towel or fight like before? Based on Lola’s determination so far, it just might be the latter! Perhaps Lola won’t be the delicate little flower in all of this. Summer is a schemer, but so is Lola when it counts. Whenever Lola feels like she’s being treated unfairly, she does something about it.

Remember how Lola got her food truck? She worked on a car lot for a while, but the guy running it fired her and refused to hand over her paycheck. Lola ranted until her boss agreed that if she could drive that old truck off the lot by sundown, it was hers. The sneaky Rosales achieved her goal, but she didn’t tell the guy she swiped parts from all the other cars to make it happen!

Maybe Lola needs to rely on that same sneaky side with Summer. She could fight fire with fire by doing some scheming of her own. Even if Lola’s hesitant because of Summer’s generous liver donation, The Young and the Restless spoilers hint that Abby Newman (Melissa Ordway) could nudge her along. Y&R buzz hints that Lola might be able to induce Kyle to divorce Summer!

After Abby finds out Mia slept with Arturo Rosales (Jason Canela), she’ll have absolutely no use for manipulative women without boundaries. That goes for Summer, too. Abby and Lola could even team up to somehow drive Summer out of the picture. Whatever the case, The Young and the Restless spoilers say Summer’s victory may not be as solid as she thinks.

Do you hope Lola fights back? Should she stoop to Summer’s level and sabotage her rival’s shot with Kyle? We’ll give you updates as other Y&R news comes in. Stay tuned to the CBS soap and don’t forget to check CDL often for the latest Young and the Restless spoilers, updates, and news.