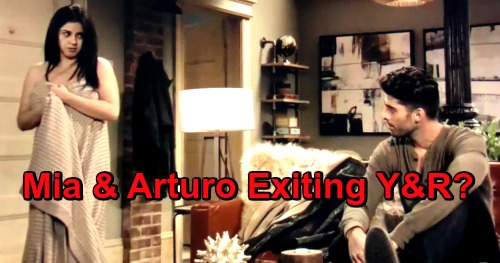 The Young and the Restless (Y&R) spoilers tease that Arturo Rosales’ (Jason Canela) mistake will bring a tough task. He slept with Mia Rosales (Noemi Gonzalez) and now it’s coming back to bite him. Mia’s desperate to get back together with Rey Rosales (Jordi Vilasuso), but he’s fed up with Mia and in love with Sharon Newman (Sharon Case). That’s forced Mia to use Arturo’s secret against him.

However, Arturo will decide to take a stand against Mia’s scheming. He’ll nip this in the bud quickly and hope Abby Newman (Melissa Ordway) appreciates his honesty. Arturo will know he could lose Abby over it, but at least Mia won’t have such a tight grip on him.

The Young and the Restless spoilers say Arturo will come clean to Abby during the week of March 25-29. He’ll fill her in on his betrayal and admit that Mia was the one he had sex with. Arturo has always been so adamant that Mia is his past and Abby is his future. As a result, Abby will face a mixture of shock, pain and the most intense rage you can imagine.

Abby will grab a hammer and head over to what appears to be Mia’s car. She’ll want to make Mia suffer in any way she can. Arturo certainly won’t get off scot-free either. Abby has done her fair of cheating and has no room to talk, but that doesn’t mean she has to put up with this. She paid the price for many of her own mistakes, so Arturo can pay as well. He just might get dumped on the spot!

As for Mia, she’s clearly in even deeper trouble. That’s because she’s either pregnant with a fake baby or with Arturo’s baby. Rey is bound to discover the hookup news eventually. Mia’s baby lies will cause plenty of problems in the Rosales family, so we have to wonder if more cast cuts are in the works.

This Young and the Restless rewrite seems sudden and rushed, which suggests there’s a plan in mind. It seems obvious that Josh Griffith, Y&R’s new head writer, most likely inserted the twist. Is this intended to be an exit story for Mia and Arturo? There’s pretty much no chance Rey will take Mia back after all her drama. As we mentioned, Arturo and Abby’s romance is probably doomed, too.

This might be an easy strategy to get rid of a couple Rosales family members. Rey and Lola are arguably the best characters of the group, so Y&R might let them hang around for now. Meanwhile, Arturo and Mia could leave together or apart.

Once the hookup bomb drops on Rey, things will head downhill from there. Rey’s bound to have questions about that baby’s paternity – if there’s even a baby at all. Mia and Arturo may not be able to show their faces in GC after this mess erupts!