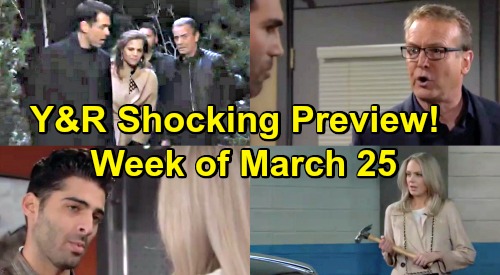 The Young and the Restless (Y&R) spoilers for the week of March 25-29 tease that some shocking moments are on the way. For starters, the J.T. Hellstrom (Thad Luckinbill) saga will take another crazy turn. J.T. shows up to confront the women on Wednesday and collapses after some apparent medical issues. That leaves the ladies stuck in the cabin with the gas leak, but help is coming!

Next week, Victor Newman (Eric Braeden) will show up to save Nikki Newman (Melody Thomas Scott), Victoria Newman (Amelia Heinle) and Sharon Newman (Sharon Case). He’ll be joined by Nick Newman (Joshua Morrow) as they work to get to the ladies in time. Billy Abbott (Jason Thompson) and Phyllis Summers (Gina Tognoni) will be there taking stock of the situation when the Newman men arrive.

The Young and the Restless spoilers say the four of them will discuss what’s next. Victor will guess J.T. must’ve saw through their plan. Of course, J.T. was also monitoring the cover-up crew’s every move, even after their convictions. That made it easy for J.T. to track down Victoria, Nikki and Sharon at the cabin.

However, what really matters now is getting the women to safety. Billy will assume that J.T.’s inside, and Victor will add that he’s probably got a gun. That’s true, but none of them will know about the gas leak and the threat of explosion. It’s clear that they’ll need to move fast and get the women out ASAP.

Since we all know the Victoria, Sharon and Nikki are going to survive, that just leaves J.T.’s fate up in the air. Will he be saved along with the cover-up crew? Perhaps J.T. will be shown mercy even though that’s something he hasn’t been giving out.

Later, Rey Rosales (Jordi Vilasuso) will pay the price for helping Sharon and the others. Paul Williams (Doug Davidson) will make a big splash with his return by firing Rey! He’ll insist that he recruited Rey as someone who was dedicated to the law and did things by the book. Since that’s not the case anymore, Paul will fire Rey and declare that they’re done here. He’ll order Rey to turn in his badge and his gun.

Arturo Rosales (Jason Canela) won’t be having a great week either. He’ll decide to take away Mia Rosales (Noemi Gonzalez) leverage by confessing to Abby Newman (Melissa Ordway), but the aftermath won’t be pretty. The Young and the Restless spoilers say Arturo will admit to sleeping with another woman. He’ll reveal that Mia was the one he hooked up with, so Abby will hit the roof.

Y&R’s latest promo shows Abby approaching a car with a hammer. It looks like she’s ready to do some serious damage, so Mia’s vehicle may not fare too well. The Young and the Restless fans won’t want to miss all the excitement. We’ll give you updates as other Y&R news comes in. Stay tuned to the CBS soap and don’t forget to check CDL often for the latest Young and the Restless spoilers, updates, and news.