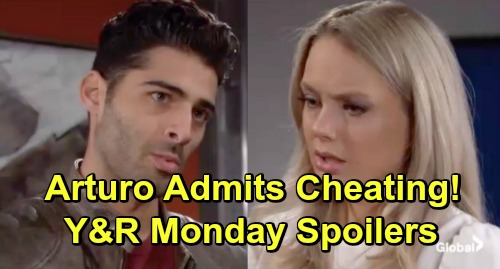 The Young and the Restless (Y&R) spoilers for Monday, March 25, tease that some big confessions are about go down. For starters, Arturo Rosales (Jason Canela) will determine that a dangerous secret must be divulged. He had sex with Mia Rosales (Noemi Gonzalez) the night of the snowstorm, but he was originally hoping he could keep that under wraps.

Thanks to Mia, Arturo is now facing a difficult choice. He can help Mia reunite with Rey Rosales (Jordi Vilasuso) or just come clean. Instead of doing Mia’s dirty work for her, Arturo will make a tough admission to Abby Newman (Melissa Ordway). He’ll let her know he slept with someone else, which is bad enough. When Arturo reveals that Mia is “the other woman,” Abby will be even more infuriated.

Arturo will undoubtedly get some very deserved backlash over this. He’s a huge hypocrite since he ranted at Kyle Abbott (Michael Mealor) for kissing Summer Newman (Hunter King). Arturo even went as far as to ban Kyle from Lola Rosales’ (Sasha Calle) hospital room. Remember when he insisted he’d never do to Abby what Kyle did to Lola? Well, Arturo actually did far worse.

We can’t forget what Arturo’s done to his brother either. He’s betrayed Rey not once but twice, so he deserves whatever he gets. Let’s hope Abby really unleashes her wrath! She’ll head for Mia’s car with a hammer at some point this week, so her rival certainly won’t be spared.

Meanwhile, Kyle Abbott (Michael Mealor) will make an admission of his own. He’s been avoiding Lola, but he won’t be able to do that for much longer. The Young and the Restless spoilers say Kyle will visit Lola’s bedside and drop some serious bombs on her. He’ll decide to be honest, so it sounds like the whole truth will come out.

Kyle loves Lola, so filling her in on the real story is for the best. Maybe it’ll hurt less to know that Kyle saved Lola’s life by marrying Summer. Of course, there’s still going to be plenty of pain, especially when Lola realizes Kyle’s going to honor the commitment he made – if he can anyway.

That’ll be another problem to tackle. Summer will have a hard time waking up from her surgery, so Kyle will be worried about his new bride. He may fear he broke his promise that nothing would happen to her. Kyle will just hope Summer can pull through this. He may be in love with Lola, but he’s got some love in his heart for Summer, too.

Outside the Abbott cabin, Victor Newman (Eric Braeden) and Nick Newman (Joshua Morrow) will find Billy Abbott (Jason Thompson) and Phyllis Summers (Gina Tognoni). They’ll figure out that an armed J.T. Hellstrom (Thad Luckinbill) must be inside with the women, so a plan will form on how to get the ladies out.

Victoria Newman (Amelia Heinle), Nikki Newman (Melody Thomas Scott) and Sharon Newman (Sharon Case) will all be trapped inside as a gas leak continues to emit fumes. Y&R spoilers say the clock will be ticking on this rescue effort. As the explosion danger revs up, Victor and the others outside will have to think fast.