The Young and the Restless Spoilers: Kerry and Ashley Drop Betrayal Bomb – Phyllis Thrown Out of Jabot, Karma Hits Hard

BY Heather Hughes on March 20, 2019 | Comments: one comment
Related : Soap Opera, Spoiler, Television, The Young and the Restless 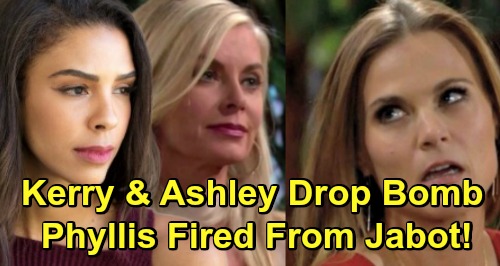 The Young and the Restless (Y&R) spoilers tease that Phyllis Summers (Gina Tognoni) will do her best to right a wrong. She sold out the rest of the cover-up crew in exchange for immunity and made things worse for them on the stand. Phyllis can insist she was trying to help the others all she wants, but who is she kidding? We all saw how she demanded her selfish deal and blabbed almost every detail.

Phyllis’ help was only a failed attempt in the courtroom, so she’s got a lot to make up for. The Young and the Restless spoilers say her involvement at the cabin will be a nice start. Next week, March 25-29, Phyllis will do whatever she can to assist Billy Abbott (Jason Thompson), Nick Newman (Joshua Morrow) and Victor Newman (Eric Braeden) with a rescue plan.

Y&R wouldn’t have put Phyllis at the scene without a solid reason, so she should play a role in saving Sharon Newman (Sharon Case), Victoria Newman (Amelia Heinle) and Nikki Newman (Melody Thomas Scott). That will offer a little redemption for Phyllis, but it won’t be enough. Again, she’s got a lot to make up for!

Phyllis is part of the reason the ladies were left vulnerable and became J.T. Hellstrom’s (Thad Luckinbill) victims again. Her presumably heroic efforts with the guys won’t erase her betrayal. That’s why Y&R will make her pay another way. A bomb is about to drop on Phyllis, which will hurt her both personally and professionally.

Phyllis feels like Kerry Johnson (Alice Hunter) is the one person she can count on. Since she’s viewed as the traitor around town, Phyllis doesn’t have many friends right now…or ever if we’re being honest. She’s thrilled to have Kerry in her corner, but we know Kerry is secretly working against both Phyllis and Jack Abbott (Peter Bergman).

The Young and the Restless spoilers say Phyllis will soon know that as well. During the week of March 25-29, Ashley Abbott (Eileen Davidson) will surprise everyone when she returns to Genoa City. However, there’s a good chance no one will be more surprised than Phyllis. Ashley is most likely Kerry’s secret boss, so are they ready to lower the boom? It sure looks like it!

Ashley will only be around for a two-day stint, so it sounds like she’ll deliver a betrayal shocker and leave everybody else to face the damage. The blow to Jabot will undoubtedly be enough to knock Phyllis off the throne. She’ll also lose Kerry as someone she thought was a friend, which means karma will hit Phyllis hard.