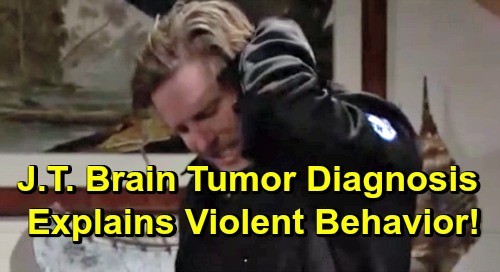 The Young and the Restless (Y&R) spoilers tease that there may be a good reason for J.T. Hellstrom’s (Thad Luckinbill) terrible behavior. Many Y&R fans were upset when J.T. returned for an abuse arc, which concluded with what the cover-up crew thought was his death. Of course, things have gotten much worse since then. J.T. actually survived and has been targeting the ladies for nearly a year.

Since J.T’s done some pretty outrageous things, it’s clear that he’s gone far beyond just being an abuser. J.T. is a full-blown villain at this point, which makes no sense when you consider his younger days on the show. That’s why a major rewrite may shake up this storyline.

In Wednesday’s Y&R episode, J.T. keeps gripping head in agony as he confronts the girls’ night gang. He even calls extra attention to the problem by shouting, “My head!” The Young and the Restless wouldn’t just throw that in without explaining it, so there must be more info to come. This could also give us a clue about J.T.’s fate.

Since a gas leak breaks out in Wednesday’s episode, that means the cabin could explode next week, March 25-29. If it does, Victoria Newman (Amelia Heinle), Nikki Newman (Melody Thomas Scott) and Sharon Newman (Sharon Case) will obviously make it out alive. Will J.T. be as lucky? If the show’s going to offer an explanation for the head situation, they’ll have to do some kind of follow-up.

An explosion would likely blow J.T. to smithereens and leave nothing behind for an autopsy. Then again, J.T. could be caught in it as he’s trying to get away. That scenario could leave J.T.’s dead body intact enough to have his brain examined. A tumor could easily be found and pointed to as the cause of J.T. going off the rails.

However, it seems more likely that J.T. will be pulled out with the cover-up crew – perhaps after a debate among Victor Newman (Eric Braeden), Nick Newman (Joshua Morrow), Billy Abbott (Jason Thompson) and Phyllis Summers (Gina Tognoni). It’d be awfully heroic of Victor to call for J.T.’s rescue, especially after J.T. tried to kill him twice and proceeded to torment his family.

While Victor was accused of murdering J.T., there was talk about it not being his style. Maybe that’ll be the case when Victor has a chance to let J.T. die, too. Would he rather see J.T. locked up for his crimes? Regardless, it’d probably be pointless to give J.T. a brain tumor unless he’s going to be alive for the redemption it brings. J.T.’s survival is the logical conclusion. Instead of prison, he may be in desperate need of treatment.

In an interview with TV Insider, Luckinbill offered a comment that backs up the brain tumor defense. “That relationship [between Colleen and J.T.] was a big part of what I used to justify where the character was. Other things came to light that I didn’t even know about. Even in this next round of me being there, it’s really clever what Josh [Griffith, head writer] has come up with.”

Since Griffith is apparently including a twist, the brain tumor route seems like the way to go. It may be discovered after J.T.’s hospitalized, so that could be something else for the cover-up to process. The Young and the Restless spoilers say some great drama’s brewing, so stay tuned. We’ll give you updates as other Y&R news comes in. Stick with the CBS soap and don’t forget to check CDL often for the latest Young and the Restless spoilers, updates, and news.