BY Heather Hughes on March 20, 2019 | Comments: one comment
Related : Soap Opera, Spoiler, Television, The Young and the Restless 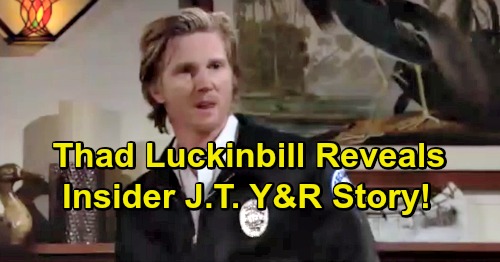 The Young and the Restless (Y&R) spoilers tease that the long and winding J.T. Hellstrom (Thad Luckinbill) saga is finally coming to an end. However, a new interview suggests the story almost didn’t happen at all! Luckinbill spoke to TV Insider about J.T.’s initial comeback as well as his latest one. It turns out Luckinbill definitely had some reservations about the direction of his character.

When Mal Young, Y&R’s former head writer and executive producer, came to him with the idea of J.T. being an abuser, Luckinbill had to mull it over. “I had to really think about it because it was definitely out there,” Luckinbill said. He admitted that possibility of coming back to Y&R was exciting, but he was “overly protective of J.T.” and how he was written.

Luckinbill thinks of The Young and the Restless cast and crew as a family to come home to, so that aspect of a return stint was appealing. Still, there was just a lot to consider. Luckinbill said, “…I had to be careful and think it through in regards to what we were saying with the character and what we were doing with it.”

In the end, Luckinbill decided to trust that Y&R knew what would work. Even though the material was heavy, Luckinbill tried to have fun along the way. “Daytime’s great because you get a chance to try some crazy things,” Luckinbill said.

J.T.’s return from the dead is certainly bringing some crazy twists, including how the character survived. A broken drain pipe allowed him to ride through the sewer system, which ultimately saved his life. Since it’s looking like J.T. may have a brain tumor, there’ll be even more shockers in the coming episodes.

Despite the success Luckinbill’s found outside of soaps, that didn’t factor into his return decision at all. Luckinbill argued that actors shouldn’t worry about the norms of Hollywood. He just enjoys acting, no matter what the project is.

That’s excellent news since J.T. was desperately needed to wrap up this messy story. Nikki Newman (Melody Thomas Scott), Victoria Newman (Amelia Heinle) and Sharon Newman (Sharon Case) have been in a real legal bind, so the fact that J.T. was never murdered will help.

The Young and the Restless spoilers say Christine Williams (Lauralee Bell) will still matters difficult, but their situation will improve soon. Are you excited to see J.T.’s final scenes and watch the cover-up crew deal with the drama? We’ll give you updates as other Y&R details emerge. Stick with the CBS soap and don’t forget to check CDL often for the latest Young and the Restless spoilers, updates, and news.