The Young and the Restless Spoilers: Rey Catches Mia In Bed With Arturo – Fallout Runs Deep, Paves Way For Shey?

BY hellodrdavis on December 30, 2018 | Comments: 2 comments
Related : Soap Opera, Spoiler, Television, The Young and the Restless 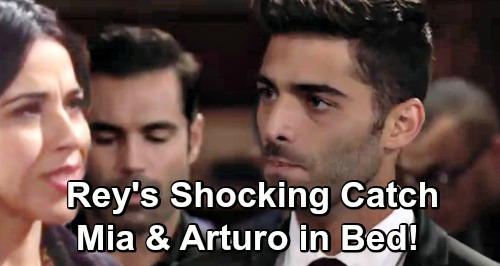 The Young and the Restless spoilers tease that Arturo Rosales (Jason Canela) will soon face some serious temptation. He was not happy when Mia Rosales (Noemi Gonzales) showed up in Genoa City, and for a good reason. He was Mia’s flame before she married Rey Gonzales (Jordi Vilasuso) and he had a torrid affair with her after she became Rey’s wife.

But it looks like Mia and Arturo may gravitate back toward each other in the near future. Sure, Arturo seems pretty happy with Abby Newman (Melissa Ordway), but there seems to be something strong, and possibly unfinished, between him and Mia.

Plus, Soap Opera Digest’s 2019 preview states that Mia will still feel a pull toward Arturo, so it’s possible that she will heavily pursue him in the days to come. Could she ultimately wear Arturo down and end up in bed with him?

It might take some time and some maneuvering, but it’s certainly possible. Of course, if they do end up in bed together, it’s likely that they’ll be caught, possibly by Abby or Rey. Given their history of a previous affair, it would be fitting for Rey to catch the two of them together, perhaps even in he and Mia’s own apartment.

Of course, if that happens, then the fallout will run deep. Arturo’s relationship with Abby will be almost surely kaput. There’s no way Abby would take Arturo back if he cheated on her – and especially if he cheated on her with Mia, who Abby can’t stand. And Rey’s relationship with Arturo would be totally done. The two brothers barely get along now, but a new Arturo-Mia affair would end their brotherhood totally.

But from a romantic standpoint, the whole situation might be advantageous for Rey. Rey is back together with Mia for now, but you can tell that he’s not 100% committed to it. He clearly has very strong feelings for Sharon Newman (Sharon Case) still, and he’s more than a little conflicted about being with Mia when he feels something for Sharon.

An Arturo-Mia affair would almost surely pave the way for a Rey-Sharon pairing – Shey could become a Genoa City reality. Rey and Sharon have a strong attraction anyway, plus Sharon could be the person who Rey turns to for comfort after Mia betrays him. And nothing would peeve Mia more than if Rey turns to Sharon after her affair with Arturo.

Do you think Arturo and Mia will wind up in bed together in 2019? Stay tuned to the CBS soap and don’t forget to check CDL often for the latest Young and the Restless spoilers, updates, and news.