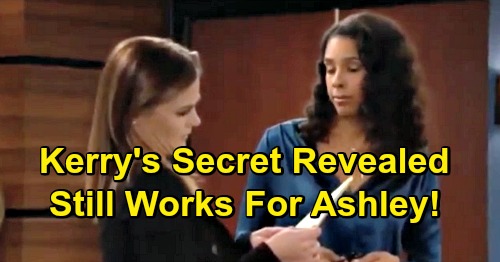 The Young and the Restless (Y&R) spoilers tease that Kerry Johnson (Alice Hunter) will keep big secrets from Jack Abbott (Peter Bergman) and Phyllis Summers (Gina Tognoni). After pledging her loyalty to each of them, Kerry will scheme against the two people she’s grown closest to in Genoa City. She’ll play both sides since her loyalties will really lie with a mysterious partner.

On Monday’s new Y&R episode, March 11, Kerry will text this partner and insist their plot is working. She’ll contend that they’ve got Jack and Phyllis right where they want them. We also know a big reveal is coming up, which will undoubtedly involve who Kerry’s working with. There’s already been plenty of speculation thanks to Hunter’s tweets about Kerry’s shady exit.

It looks like a major clue will surface later in the week. The Young and the Restless spoilers say Phyllis will be convinced that she can trust Kerry. She views Kerry as a faithful employee as well as a good friend. Phyllis doesn’t have too many pals these days, so she’s always eager to find someone who can handle a friendship with her!

That’s why Phyllis will happily gab about her grand plan to Kerry. She’ll fill Kerry in on the details of her mission to destroy Ashley Abbott’s (Eileen Davidson) new company. Phyllis will explain how she intends to take down “My Beauty,” and Kerry will pass along the info just as quickly. She’ll text her secret partner, who is actually her boss.

It’s awfully hard to ignore all the evidence here. Y&R fans know Kerry showed up in town as a replacement for Ashley. She made Phyllis think she was firmly on her team and ultimately started dating Jack. Now she’s duping them both and more Ashley hints are coming up. The fact that Phyllis wants to target Ashley seems like a huge tipoff about what’s ahead.

Since Ashley is returning later this month, it sounds like Kerry’s been doing her dirty work in Genoa City. The Young and the Restless could always throw in a surprising twist instead, but we’d say all the puzzle pieces fit for Ash. She’s evidently become quite ruthless in her quest for cosmetic domination!

It sounds like some fun scenes are coming up in this hot storyline. We’ll give you updates as other Y&R news comes in. Stay tuned to the CBS soap and don’t forget to check CDL often for the latest Young and the Restless spoilers, updates, and news.