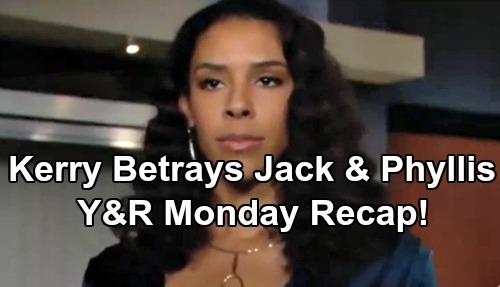 The Young and the Restless (Y&R) spoilers for Monday, March 11, tease that Phyllis Summers (Gina Tognoni) will deliver a shocker to Jack Abbott (Peter Bergman). At Jabot, Jack will be stunned to learn Kyle Abbott (Michael Mealor) is engaged to Summer Newman (Hunter King). He’ll struggle to understand since Kyle’s been so devoted to Lola Rosales (Sasha Calle).

Suddenly, Billy Abbott (Jason Thompson) will pop up and contend that people can change. He’ll lash out at Phyllis over her role in the cover-up crew’s predicament, but she’ll argue that she tried to help. Later, Phyllis will assure Jack she wishes things hadn’t gone down like this. She’ll also notice that he’s wearing Kerry Johnson’s (Alice Hunter) Jack of Hearts fragrance, which she’s a fan of.

Once Phyllis leaves, Jack will let Billy smell what will be Jabot’s first scent following Phyllis ouster. Meanwhile, Phyllis will meet up with Kerry. She’ll want to market that Jack of Hearts fragrance, but Kerry will only do it for a price. After they reach an agreement, Kerry will text someone about having Phyllis and Jack right where she wants them. This sneaky schemer is clearly up to no good!

Other Young and the Restless spoilers say Kyle will feign surprise at the hospital. He’ll act like he’s taken aback and thrilled over the anonymous donor. However, Kyle will slip up when he refers to the donor as a “she.” He’ll manage to cover his blunder, but a bigger problem will arise when Summer walks in.

After Rey Rosales (Jordi Vilasuso) and Arturo Rosales (Jason Canela) give Summer updates on the donor, she’ll reveal that she’s got something to share, too. Kyle will do it for her by admitting they’re getting married. He’ll tell Arturo and Rey that he caused Lola great pain, so this is really for the best. Arturo will hope that Kyle is finally out of Lola’s life permanently.

Next, Rey will speak with Arturo privately about what happened in court. They’ll discuss the Mia Rosales (Noemi Gonzalez) situation before revisiting the subject of Kyle. Rey will point out that there could be a reason for the surprising developments. He’ll consider the possibility that Summer is Lola’s liver donor.

At the Abbott mansion, Kyle will take Summer to spread their engagement news. Jack will admit he’s already in the loop. He’ll just want happiness for his son and his bride-to-be. Billy will also offer some words of congratulations. Once Summer and Kyle are gone, Y&R spoilers say Jack and Billy will discuss this head-scratcher. They won’t get why Kyle suddenly wants to marry Summer.

Billy will wonder if Kyle might side with Phyllis in the boardroom now, but Jack will offer reassurance. He’ll think Kyle will remain on their team. Jack will contend that Kerry isn’t going to be an issue either. He’ll promise Billy he won’t give Kerry a board seat, but he’ll still feel confident that they’ll oust Phyllis.

At Crimson Lights, a cop will show up to arrest Tessa Porter (Cait Fairbanks). Mariah Copeland (Camryn Grimes) will rattle off ways to fight this, but Tessa won’t see the point. She’ll think it’s time to take responsibility anyway. After a kiss, Tessa will be taken to the police station. Mariah will eventually visit her in an interrogation room and reveal that she’s arranged bail along with a public defender.

Tessa won’t be pleased about Mariah putting up the bail money, but Mariah will want to be together at home. She’ll be sorry she can’t do anything about tonight since Tessa’s being arraigned tomorrow. Tessa will warn Mariah that she could do serious jail time, but Mariah will just want to take things day by day. She’ll give Tessa another kiss before she goes.

Back with Summer, she’ll confess that she’s scared about the surgery. Summer will eventually ask Kyle to marry her beforehand so she can wake up with her husband by her side. Kyle will want to keep Lola’s donor happy, so he’ll go along with the idea.