BY Heather Hughes on March 8, 2019 | Comments: one comment
Related : Soap Opera, Spoiler, Television, The Young and the Restless 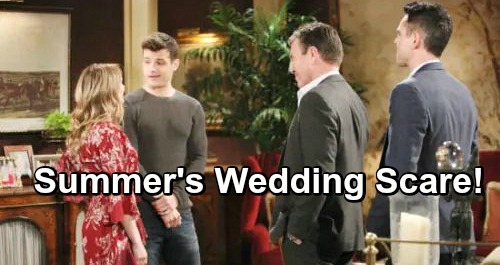 The Young and the Restless (Y&R) spoilers tease that Kyle Abbott (Michael Mealor) will get cold feet. He recently volunteered to marry Summer Newman (Hunter King), so she took him up on the offer. Kyle was willing to agree to just about anything if it meant saving Lola Rosales (Sasha Calle). Since Summer is a liver donor match, Kyle has to keep her happy and hope she can keep Lola alive.

However, doubts will creep in for Kyle during new Y&R episodes the week of March 11-15. He’ll worry that maybe he’s making a huge mistake. Kyle is still in love with Lola, so the idea of signing on for a year-long marriage to someone else isn’t appealing. That’s especially true since it’s Summer, who set Lola’s drama in motion by driving her away from Kyle.

Summer’s actions put Lola in the wrong place at the wrong time. If it hadn’t been for her, Lola never would’ve been attacked. Nevertheless, that won’t be the real issue here. Kyle will mainly be torn about giving up on his Y&R love story with Lola. He’ll end up avoiding the wedding that Summer throws together, so she’ll be concerned when he’s a no-show.

Panicked Summer will fear Kyle’s backing out of their deal, but the groom will eventually walk in and offer an apology. Kyle will be sorry he’s a bit late, but he’ll assure Summer that he’s ready to marry. The Young and the Restless spoilers say he’ll play the part of a doting soon-to-be husband. Kyle will realize that’s what he has to do if he wants to get Lola the liver she needs.

Even though Kyle won’t be thrilled about the nuptials, he’ll sense that Summer’s love is pure. This is more than just an obsession for her. Kyle might’ve initially thought this was about jealousy or simply conquering a challenge, but he’ll see that there’s genuine love in Summer’s heart.

Will that make a difference once this marriage kicks off? Could Kyle learn to love Summer just like she hopes he will? Time will tell, but Kyle will be focused on Lola for now. After the wedding concludes, Summer will have to skip the honeymoon and opt for a hospital stint instead. Once Kyle fulfills his promise, Summer will fulfill hers as well.