The Young and the Restless Spoilers: Justin Hartley Weighs In On New Adam Newman Recast

BY Heather Hughes on March 8, 2019 | Comments: one comment
Related : Comings & Goings, Soap Opera, Spoiler, Television, The Young and the Restless 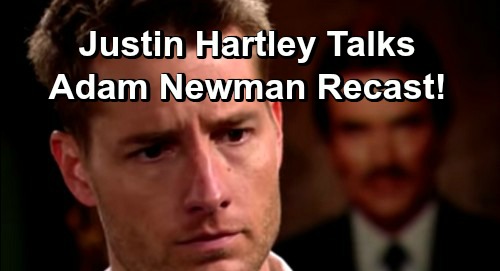 The Young and the Restless (Y&R) spoilers reveal that the CBS soap is still on the hunt for a new Adam Newman. There’s been no official word on a recast yet, so Y&R may be taking their time as they work to find the right fit. They could use someone who’s got strong acting credits, but they can’t push for too big of a name. The last thing we need is another actor who’ll end up bolting in a couple years.

Of course, no one can blame Justin Hartley for bailing on the role and finding success elsewhere. Hartley is doing a fantastic job as Kevin Pearson on NBC’s hit drama, This Is Us. However, what The Young and the Restless really needs is someone who will stay the course. If they can find a solid Adam who will stick around, they could really develop the character again and provide some gripping drama.

That’s undoubtedly Y&R’s goal right now, so it makes sense that we haven’t heard news about the part just yet. The longer it takes, the more likely it becomes that they’ll score the perfect guy. As for Hartley, he has no qualms about the show passing the Adam torch. In fact, he supports the idea.

In an interview with Soap Opera Digest, Hartley weighed in on The Young and the Restless’ search for a new Adam. He loved bringing Adam to life, so he’s eager to see what the future will bring. When asked about the recast, Hartley had only positive things to say. “I think that’s great,” Hartley insisted. “They should. Adam is a great character.”

Some Y&R viewers are clinging to the hope that Michael Muhney will reprise the role, which he held before Hartley. If The Young and the Restless wanted him back, they probably would’ve asked him by now. After all, they’d know what they were getting as far as Muhney’s performance goes. Since some scandals were tied to Muhney’s previous run, it seems the show just opted to start fresh.

That’s why there’s been a casting call and the current Adam Newman search is underway. The Young and the Restless spoilers say more Newman family mayhem is brewing, so it should be interesting to see how Adam fits in down the road. We’ll give you updates as other Y&R details emerge. Stick with the CBS soap and don’t forget to check CDL often for the latest Young and the Restless spoilers, updates, and news.