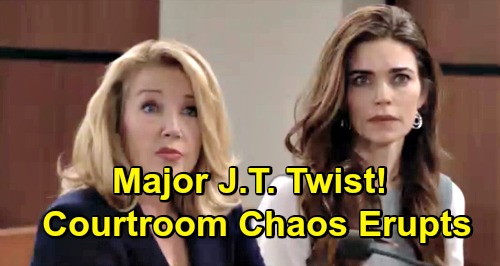 The Young and the Restless (Y&R) spoilers tease that the cover-up crew will await big news. Nikki Newman (Melody Thomas Scott), Victoria Newman (Amelia Heinle) and Sharon Newman (Sharon Case) will all worry about her fates. After the trial concludes on Friday, the jury will consider all the shockers that have been thrown at them. They’ll have to figure out if these women should be declared guilty or not guilty.

Phyllis Summers’ (Gina Tognoni) testimony was a huge blow to the defense. Plus, Michael Baldwin’s (Christian LeBlanc) strategy to put Tessa Porter (Cait Fairbanks) on the stand backfired spectacularly. However, Rey Rosales’ (Jordi Vilasuso) testimony helped undo some of the damage for Sharon. Friday’s new Y&R episode, March 8, also brings Victoria’s side of the story, which should tug at the jury’s heartstrings.

Of course, the fact remains that a man is dead, and these women are on video moving his body. They also gave into a blackmailer’s demands and threatened physical harm to make sure their secret didn’t get out. J.T. Hellstrom (Thad Luckinbill) was an abusive monster, but Sharon, Victoria and Nikki are the ones on trial. That’s something the jury will have to keep in mind.

The Young and the Restless spoilers say the women will be separated shortly after closing arguments. They’ll all have a chance to reflect on everything that brought them to this point. However, the three of them will eventually be led into a courthouse holding room. There’ll be plenty of tension while deliberations are going on.

Since Sharon confessed to Rey and put them on the path to this trial, she’ll definitely face an evil glare from Victoria and Nikki. Still, they’ll understand that this moment was inevitable. No matter how hard they tried to keep the events of that night a secret, the truth was bound to come out.

While they wait, Y&R spoilers say a special visitor will arrive. Normally, that wouldn’t be allowed, but Victor Newman (Eric Braeden) will make it happen. He’ll want to give Victoria and Nikki a pep talk before they hear what the jury’s decided. Victor will assure them that he’ll do whatever it takes to protect his family. Nikki and Victoria won’t have much hope, but they’ll try to believe in Victor’s words.

A guard will appear soon after and take the ladies into the courtroom. They’ll realize a verdict has been reached, so it’ll be time to face the music. The Young and the Restless spoilers say this verdict will actually be quite shocking. It’ll throw the cover-up crew for a loop and set up a major twist that’s still to come.

Nick Newman (Joshua Morrow) thinks J.T. may still be alive, so will he come up with some last-minute evidence? Could there be proof that helps the women beat the murder charges? Victoria, Sharon and Nikki will await sentencing at some point this week, but that could due to obstruction of justice. When you’ve told the cops a million different stories, it’s tough to wiggle out of that.

The women fully expect to go down, so a guilty verdict wouldn’t be shocking. At the same time, it’s difficult to imagine them going free without some crazy new development. Whatever happens, this is all building to J.T.’s comeback. That’s undoubtedly the major twist that the verdict sets up.

Are you looking forward to the explosive outcome of this trial? We’ll give you updates as other Y&R details emerge. Stay tuned to the CBS soap and don’t forget to check CDL often for the latest Young and the Restless spoilers, updates and news.