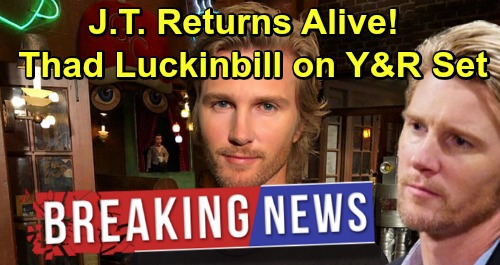 The Young and the Restless (Y&R) spoilers tease that the J.T. Hellstrom (Thad Luckinbill) saga isn’t over yet. Phyllis Summers (Gina Tognoni) cut a deal to save herself, but it’ll still cost her. She’ll certainly provoke the wrath of Victor Newman (Eric Braeden), Nick Newman (Joshua Morrow) and her fellow cover-up crew members.

Plus, Christine Williams (Lauralee Bell) could still find some way to trip Phyllis up. It’s tough to believe Phyllis will just get off scot-free while the others rot behind bars. Regardless, Y&R has left the girls’ night gang up a creek without a paddle. How in the world are they going to get out of this mess?

There’s seemingly only one possible twist to get them off the hook for J.T.’s murder. CDL has been predicting that J.T. would likely turn out to be alive at the end of all this. Thanks to a new picture leaked by the show, that appears to be the case.

The Young and the Restless’ Twitter account posted a photo of Thad Luckinbill with the caption, “Spotted On Set! J.T. Taking a coffee break.” Soap Opera Digest spoke with Luckinbill as well, and he’s excited about this big return. “It’s always great to come home and visit my Y&R family,” Luckinbill said.

Like the show’s earlier tweet, Luckinbill also advised fans to “stay tuned.” There are undoubtedly some major bombshells looming due to this J.T. development. No one else has ever made much sense as the tormentor. Victor has plenty of enemies, but the person behind this threat was willing to go after Nikki Newman (Melody Thomas Scott) and the others, too.

Nick pointed out that the person framing Victor wanted to watch Nikki suffer in the process. That lines right up with J.T., who already hated Victor and would have a motive to make Nikki pay. Sharon Newman (Sharon Case), Victoria Newman (Amelia Heinle) and Phyllis helped cover it up, so J.T. would’ve had no qualms about their fear.

Of course, the biggest tipoff is that J.T.’s corpse is missing. No body usually means the person isn’t dead on a soap! It’d be gross for J.T.’s decayed remains to pop up somewhere later. It’s much more reasonable to assume J.T. is still alive and kicking.

Since The Young and the Restless spoilers suggest J.T. will be back for his final revenge, we have to consider how he pulled this off. Did J.T. have some help? Will a partner in crime be revealed? Regardless, J.T. should bring quite a storm with him in the last chapter of this storyline. On the bright side, J.T.’s survival should allow the cover-up crew to go free.