The Young and the Restless Spoilers: Michael Muhney’s Return To Y&R as Adam Newman – Biggest Rating Bump In Soap History

BY Sean O'Brien on February 20, 2019 | Comments: one comment
Related : Soap Opera, Spoiler, Television, The Young and the Restless 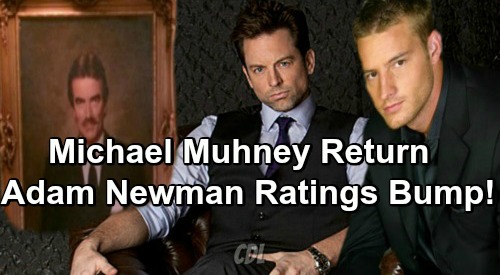 The Young and the Restless spoilers tease that Michael Muhney’s (Adam) comeback to Y&R would push daily live viewer ratings above the combined five and a half million mark the show currently garners in the United States and Canada. But would the bump be sustainable?

Y&R is said to be casting another Adam Newman, two and a half years after Justin Hartley was last seen on screen in this role. As devoted fans recall, his version of this infamous character was said to have been intentionally killed by Chloe (Elizabeth Hendrickson) via a cabin explosion in September 2016.

Hartley is not known to be seeking a return to the show, as his career is led by the role he has on the hit nighttime show, This Is Us. He could have worked a brief reprisal of Adam into his schedule, assuming that Hartley had wanted to do so. But Y&R appears intent on bringing back Adam full-time, meaning this actor can’t realistically be part of a developing casting.

Chris Engen first played the adult version of Adam (2008-2009), until Muhney took over during the second calendar year of the initial actor’s run. While Engen performed well, Muhney’s five-year (2009-2014) odyssey became, in the opinion of many, the definitive on-screen Adam.

No slight is intended toward Hartley in the above regard, as his efforts were outstanding. Y&R’s audience came to fully value the actor’s talents and cheered him mightily.

Could Y&R strike twice by recasting this role again, rather than rehiring Muhney? There’s no way to know until an alternative actor would debut and then some time passes. This conjecture would likely prove true whether the actor was known, or not.

So, assume that Muhney does come back. It is possible because Y&R interviewed him for rehire in the summer of 2014, approximately six months after letting him go. He has remained eligible for rehire, as there is no credible, available sources that prove otherwise.

If Muhney becomes Adam again it would be reasonable to think his return episode would be implied via a tease, in order to maximize the number of eyeballs that watch the show live, via digital replay that day, or through multiple viewings.

An increase of up to, or maybe over a million more viewers is plausible. Muhney has more than one-hundred thousand individual social media followers, which arguably represents the surface of those who are aware of his career and will be intrigued by his return to Y&R.

Muhney’s specifically devoted fans, along with hundreds of thousands of semi-regular and casual soap viewers, along with the curious who tune into to special events, would watch that episode, where Adam probably appears at the end, and likely, the next day’s show in order to see what happens next.

Y&R’s task would then be to keep the expanded audience engaged through a dynamic tale. Muhney’s past demonstration of electric talent would probably lift whatever scripts he’s given to a unique daytime dimension, therefore making a live viewer bump, in the hundreds of thousands per day, possible to sustain for a while.