The Young and the Restless Spoilers: Victor Sets A Trap For J.T. and Kerry After Nikki and Victoria’s Murder Conviction? 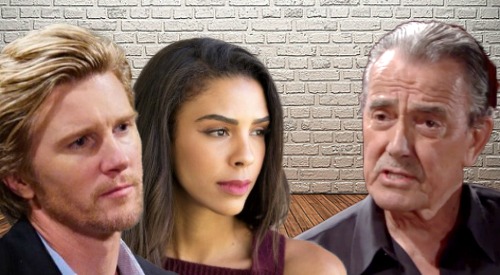 The Young and the Restless (Y&R) spoilers tease that Victor Newman (Eric Braeden) will fume as this trial continues to head downhill. Thanks to his outburst in court, Victor’s been forced to keep his distance and get updates later. You can bet he’s not liking the situation so far. Christine Williams (Lauralee Bell) is crushing this, so she has no interest in accepting any plea deals.

Later this week, another courtroom victory will give Christine even more of an advantage. She’ll fully believe guilty verdicts are on the way. Sharon Newman (Sharon Case) could have a shot at an acquittal due to Rey Rosales’ (Jordi Vilasuso) mistakes. He’s made some big ones, so it’s possible Sharon will get off the hook while the others pay.

Brittany Hodges (Lauren Woodland) is the better attorney at the moment, especially since Michael Baldwin’s (Christian LeBlanc) clients keep lying to him. However, Sharon’s verdict won’t particularly matter to Victor. He’ll only care about the outcome for Nikki Newman (Melody Thomas Scott) and Victoria Newman (Amelia Heinle), which will probably be a total disaster.

With all the evidence that’s come out and is still to come, it’s tough to imagine Nikki and Victoria avoiding murder convictions. The Young and the Restless spoilers say all three women will be sentenced during the week of March 11-15, so they’ll be convicted of something. Obstruction of justice is a definite, but they could learn their punishment for intentional second-degree homicide, too.

If Victoria and Nikki go down, Victor’s revenge should begin. These are two people he loves dearly, so his rage will be intense. Phyllis Summers (Gina Tognoni) has already been warned, so she could certainly face Victor’s wrath. Of course, Victor should also throw his attention into finding the tormentor.

For Victor, it may all go back to the mysterious Y&R enemy that deserves his fury. While Nikki and Victoria are potentially locked up, Victor and Nick might join forces to find the person who targeted their family. Since Alice Hunter announced that she is leaving Y&R and that Kerry Johnson’s exit story will include some shockers Y&R buzz is that she is J.T.’s secret accomplice.

Nick and Victor considered the possibility it may be J.T. Hellstrom (Thad Luckinbill) himself but perhaps the Newmans are facing more than a single enemy. The Young and the Restless spoilers hint that Victor might need outsmart more than J.T.  alone and set a trap for Kerry with Nick’s help.

The Young and the Restless spoilers say J.T. is likely alive and will return to the screen as soon as the week of March 11-15, so fans should expect the action to really heat up as the Coverup Crew sentencing unfolds. Maybe J.T. and Kerry have underestimated the power of Victor’s love for his family.

He just might be the one to exonerate Victoria and Nikki! We’ll keep you posted as other Y&R news comes in. Stick with the CBS soap and don’t forget to check CDL often for the latest Young and the Restless spoilers, updates and news.