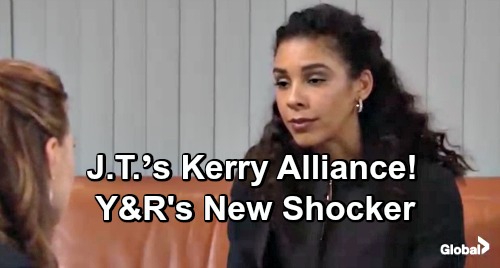 The Young and the Restless (Y&R) spoilers reveal that Kerry Johnson (Alice Hunter) will leave Genoa City, but she’ll stir up serious drama before her exit. Based on how the story’s played out so far, you might expect Kerry and Jack Abbott (Peter Bergman) to break up over her baby desires. If not that, you might think Kerry would get fired after her potential betrayal of Phyllis Summers (Gina Tognoni).

After all, there are plenty of ways for things to go wrong Jabot, which means there’ll be plenty of opportunities for Kerry to get burned. However, it looks like Kerry’s the one who’s been doing the burning! Instead of a simple breakup with Jack or Jabot firing, Y&R is going with something much more shocking for Kerry’s exit. They’re ditching their earlier plan in favor of a big surprise.

In her original departure announcement on Twitter, Alice Hunter explained that “Kerry is taking an indefinite hiatus.” She added that Kerry “earns it” and assured fans that she loved playing this arc. Afterward, Hunter replied to several Young and the Restless fans with questions about the direction of her character. She had some comments that are definitely worth taking a closer look at.

One fan said she loved that Kerry was a smart black businesswoman and not a schemer. She seemed disappointed by the new direction, so Hunter offered an explanation. “According to Mal, the character was meant to be one thing, changed into another, and I believe another upon his exit.”

Of course, Hunter was referring to Mal Young, Y&R’s former head writer and executive producer. It sounds like The Young and the Restless could never settle on who they wanted Kerry to be, which is probably why she became a cast cut. It also lets us know that Young seemingly had nothing to do with the twist that’s brewing, which is why it wasn’t set up before.

There’s a good chance that twist is that Kerry is in cahoots with J.T. Hellstrom (Thad Luckinbill). The timing fits since Hunter recently shot some explosive scenes and Luckinbill has been back on set. Hunter had another comment that backs up that idea. Another viewer told Hunter that they hoped she got a nice exit. She replied, “I liked a lot about it but we’ll see how it goes over!”

The idea of J.T. and Kerry scheming together would be a hit with some fans, but it might be a flop with others. That lines up with Hunter’s fears about how the big reveal will be received. All signs point toward Kerry and J.T. having a secret alliance, so it’s easy to see why Hunter would enjoy playing a fun arc like that. Whether viewers feel the same or not, Hunter’s clearly had a blast!