The Young and the Restless Spoilers: Sentencing Time for Nikki, Victoria and Sharon – Cover-up Crew Members Learn Their Punishment 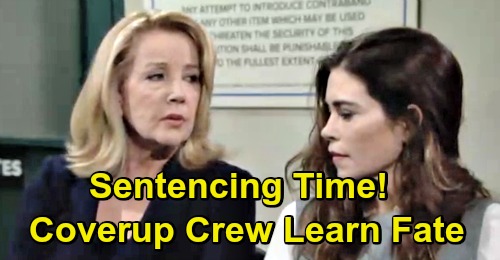 The Young and the Restless (Y&R) spoilers tease that there’ll be several curveballs as the courtroom chaos heats up. Christine Williams (Lauralee Bell) is clearly on a fierce mission to bring these women down. She always fights for victims, but this time is different. Christine has a chance to lock up some Newmans, so she’s giving this case everything she’s got.

Michael Baldwin’s (Christian LeBlanc) strategy will continue to fall apart thanks to his lying clients. It makes no sense for Nikki Newman (Melody Thomas Scott) and Victoria Newman (Amelia Heinle) to keep so many secrets from their attorney, but they’re doing it anyway. Christine will manage to gain the upper hand as a result.

Michael hopes Tessa Porter’s (Cait Fairbanks) testimony will be Victoria and Nikki’s ticket to sympathy as well as freedom. Unfortunately, all he’ll manage to do is blow up Tessa’s life and Mariah Copeland’s (Camryn Grimes) life as a result. Of course, Michael won’t care about any of that. He’ll just focus on winning this case with another desperate strategy.

Victoria will take the stand to testify about J.T. Hellstrom’s (Thad Luckinbill) abuse. That should certainly make her look more sympathetic, but will the damage be worth it? You can bet Christine will destroy Victoria when it’s her turn to grill her.

There’s no word yet on whether Nikki will take the stand and share her tale after all, but that could be even riskier. She’s told far too many conflicting stories. Based on how everything’s played out so far, we’d say there’s almost no chance of Nikki and Victoria getting off the hook for J.T.’s murder – not like this anyway.

Sharon Newman (Sharon Case) might have a glimmer of hope since Brittany Hodges (Lauren Woodland) has tried to separate her from the pack. She’ll also have the advantage of Rey Rosales’ (Jordi Vilasuso) improper police procedure. He shouldn’t have been declaring his love for Sharon, digging through her bills, promising protection and interrogating her in her own home. None of that makes the GCPD look good.

Brittany will think Rey’s mistakes spell acquittal on the murder charges, but there are no guarantees. One thing’s for sure: Nikki, Sharon and Victoria are going down for obstruction of justice. No one has ever obstructed justice more!

However, there’s a good possibility they could all pay the price for J.T.’s murder as well. The Young and the Restless spoilers say the ladies will wait for sentencing during the week of March 11-15. They’ll all be nervous wrecks as they consider their future.

These women will undoubtedly worry about getting locked up for many years and missing out on so much time with their families. There are kids and grandkids to think about, so the stakes are high. Y&R spoilers say Nikki, Victoria and Sharon could face harsh punishments, but they’ll have to wiggle out of this eventually. J.T.’s return from the dead could be exactly what they need down the road!