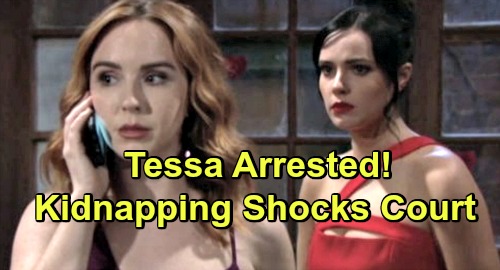 The Young and the Restless (Y&R) spoilers tease that secrets will come back to bite several Genoa City residents. Y&R fans know a murder trial is underway, but there are plenty of other crimes to be exposed. Mariah Copeland (Camryn Grimes) will keep lying for Tessa Porter’s (Cait Fairbanks) sake, but she’s only delaying the inevitable. It’s just a matter of time until the blackmail shocker comes out.

Michael Baldwin (Christian LeBlanc) is struggling to defend his dishonest clients. Nikki Newman (Melody Thomas Scott) and Victoria Newman (Amelia Heinle) simply refuse to give their attorney all the facts. That could be a huge problem once Michael drops the blackmail bomb. This is far more complicated than he knows, so he’s destined to face more unpleasant surprises.

Nick Newman (Joshua Morrow) assured Mariah and Tessa that the blackmail would be kept under wraps. He thought the payment would only make Victoria and Nikki look guilty, which is probably true. However, Michael thinks this will help for some strange reason. He feels like they can play the victim card, but that’s not going to work out like he thinks it will.

The Young and the Restless spoilers say Tessa will be arrested next week, which will set off a shocking chain reaction. She’ll undoubtedly do whatever she can to keep Mariah out of trouble. Mariah lied in her testimony, but Christine Williams (Lauralee Bell) has bigger fish to fry. She may hope to mainly use Mariah and Tessa in her case against the cover-up crew.

As luck would have it, there are some other bombshells just waiting to come out. We can’t forget that Victoria, Nikki and Sharon Newman (Sharon Case) threw a bag over Tessa’s head and drove her to the middle of nowhere. They grilled her until she basically had a breakdown and left her out in the cold. Who’s going to look most sympathetic if that tidbit comes out? It certainly isn’t Victoria and Nikki!

The reason for that little road trip is important, too. The gang wanted to make sure Tessa hadn’t moved the body or framed Victor Newman (Eric Braeden). If Tessa testifies to any of this, it’s only going to make Michael’s battle worse. Victoria also set up illegal surveillance in Tessa’s home, so that’s another strike against the Newmans.

Of course, Tessa wouldn’t want to squeal on Sharon and hurt Mariah. BUT…what if Sharon’s the one who brings it up to Brittany Hodges (Lauren Woodland)? After all, Sharon’s been far more honest than her partners in crime. She’d hate to see Mariah suffering, so she might share the whole ugly story. In that case, Brittany may decide they could actually use this to Sharon’s advantage.

Sharon may have been in the car that night, but she wasn’t a willing participant. She tried to make Victoria and Nikki stop terrorizing Tessa, but they just kept pushing. That lines right up with Brittany’s strategy of distancing Sharon from the mother-daughter duo.

With Tessa’s testimony to back her up, Brittany could argue that Sharon was pressured to go along with the kidnapping – just like she was pressured to conceal J.T. Hellstrom’s (Thad Luckinbill) murder. Phyllis Summers (Gina Tognoni) was really the ringleader in the cover-up, but the goal is to get Sharon off the hook. You can bet Brittany will use anything she can to make that happen.

Will Tessa face a lighter punishment as a result of the kidnapping drama? Will she cut some kind of deal instead? Regardless, The Young and the Restless spoilers say Cait Fairbanks is still filming. There must be some way to get Tessa out of this mess!

Y&R fans won’t want to miss all the action ahead. We’ll give you updates as other news comes in. Stay tuned to the CBS soap and don’t forget to check CDL often for the latest Young and the Restless spoilers, updates, and news.